Army personnel stand guard atop St. Anthony's Church during a Mass in remembrance of the Easter Sunday attack victims to mark the second anniversary of the atrocity in Colombo on April 21. (Photo: AFP)

Rights bodies and activists have called on the Sri Lankan government to establish a truth commission to build public trust and to seek justice for victims of the country's 26-year civil war and 2019 Easter terror attacks.

"A truth commission could be an effective mechanism in this regard. Such additions to the country’s social capital, of which trust is a most important component, will enable countries that voted for the UN Human Rights Council resolution to engage more meaningfully with the development initiatives of the government," said the National Peace Council (NPC), an independent organization that works towards a negotiated political solution to ethnic conflict in Sri Lanka.

The second anniversary of the Easter bombings that primarily targeted churches took place with the motivation and masterminds of the bombing still shrouded in mystery.

"Despite many inquiries that have been held during the terms of the previous and present governments, there continues to exist a dark cloud of unknowing which is leading to various speculations gaining ground, which add to the considerable mistrust in society," the NPC said in an April 29 statement.

"The government, religious organizations and donors have given considerable material support to the victims that have sustained them in different ways. However, their quest for truth and justice still remains unfulfilled."

A truth commission is an official body to discover and reveal past wrongdoings by governments in the hope of resolving conflicts left over from the past. The commission focuses on memories, truth, reconciliation, justice and recognition and is a temporary body.

Thousands were killed and disappeared during the civil war that ended in 2009 when the army defeated Tamil rebels. Both sides were accused of serious human rights violations.

"There will be no closure for the victims and the thousands left behind by them until their cries are heard and responded to in a meaningful manner," said the NPC.

In recent weeks there has been a flurry of arrests over the 2019 atrocity, including Muslim leaders who appear to have had peripheral ties with the suicide bombers and who have not been previously accused of being engaged in terrorist activities themselves. 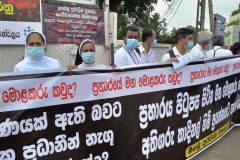 Arul Raj, a Tamil rights activist from Killinochchi, said thousands of people went missing or were killed during and after the civil war but they still do not know what happened to those missing people.

"If all citizens have equal rights, then we too have a right to know what happened to our brothers and sisters. Even though some of these missing persons were handed over to the army immediately after the end of the war, some Tamil people still have hope that these people are alive," said Raj.

"Politicians only play with innocent lives to gain political advantage to protect their power. That is why we need a truth commission."

Two years after the Easter attack, who are the masterminds behind the bombing and who spent the money on it?

Sunil Aruna, a Catholic, said the local Church and public demand the truth and the search for justice for loved ones will continue as it is a perennial part of the human condition which cannot be suppressed.

"Two years after the Easter attack, who are the masterminds behind the bombing and who spent the money on it? We have a right to know," said Aruna.

A Tamil Christian priest from Mannar said if a truth commission is established, all ethnic and religious groups will have the opportunity to know the real truth.

"The commission can find the truth and seek justice for the victims to discover and reveal all these past wrongdoings and to respect the rights of all citizens," said the priest who asked to remain anonymous.