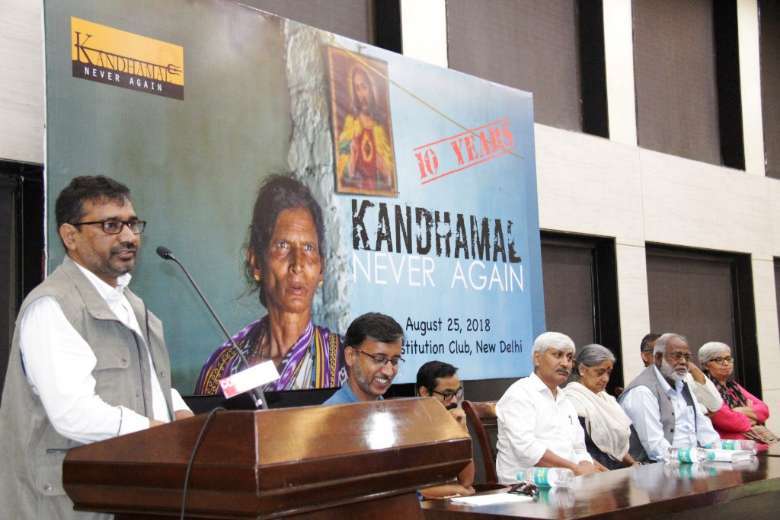 The human rights awards instituted to honor the victims and survivors of the worst anti-Christian violence in eastern India's Kandhamal district were presented this year to the Peoples Union for Civil Liberties (PUCL) and late human rights activist Paul Pradhan.

The annual awards were set up by the National Solidarity Forum (NSF) comprising 70 organizations and groups which came together in the wake of the 2008 mass violence in Odisha state's Kandhamal district to help the affected people deal with trauma, rehabilitation and justice issues.

A press statement by NSF described PUCL as a human rights body that was formed in 1976 and has worked tirelessly ever since to protect the powerless and help create a truly democratic and just society.

Paul Pradhan, who was honored posthumously, had worked with rare dedication for the empowerment of women and the rights of tribal people and Dalits in Odisha. He died of a brain hemorrhage at the age of 72 on July 10.

The two awards, which will go to an individual and an organization every year, recognize “long and sustained work on issues of human rights and civil liberties, development, harmony and peace building,” NSF convenor Dr. Ram Puniyani said in a press release.

“We observe the Kandhamal day on Aug. 25 every year by holding seminars, debates and rallies in remembrance of our people who suffered during the anti-Christian violence in Odisha and Karnataka in 2008,” he said.

Father Singh said that since the Covid-19 restriction continued to be in force across the country, they had organized virtual meetings to mark the solemn occasion. The awards presentation too was held in virtual mode.

The theme for this year was “In Defence of Human Rights and Democratic Freedoms.” The Kandhamal violence targeting tribal and Dalit Christians was triggered by the murder of Hindu leader Lakshmanand Saraswati, who was working in the area against missionary activities.

He was shot dead by gunmen at his home in Kandhamal on Aug. 23, 2008, and although Maoist rebels claimed responsibility for the murder pro-Hindu activists and groups unleashed violence against Christians.

Over 100 Christians were killed in the violence that continued for seven weeks during which women including a Catholic nun were raped and men were hacked to death. Many churches and houses were burned down.

The struggle for relief, rehabilitation and justice for the victims and survivors continues in the courts and government forums to this day.