A prominent United Nations-affiliated human rights advocate has called on the government of Laos to release three political dissidents who have been in prison since 2017, calling their continued imprisonment “an impediment to the advancement of human rights in the Southeast Asian nation.”

In a newly released statement, Mary Lawlor, the UN’s special rapporteur on the situation of human rights defenders, called for the immediate release of Lodkham Thammavong, Soukane Chaithad and Somphone Phimmasone, who were sentenced to between 12 years and 30 years in prison in 2017 for their participation the year before in a small pro-democracy rally outside the Lao embassy in Bangkok.

During the demonstration protesters demanded that their country’s communist authorities respect fundamental human rights and called for investigations of alleged cases of corruption.

When the three dissidents returned home from Thailand, where they had been working, to renew their passports, they were arrested, with the government publicly branding them a threat to national security.

Lodkham and Somphone, who were a couple, were arrested at their home in a village in Khammuan province in early March 2016, while Soukan was arrested a few days later in Savannakhet province.

The three activists, who were promptly charged and sentenced, are currently serving their sentences in Samkhe Prison, near Vientiane, the capital.

The government should also explain the harsh prison sentences

“I am deeply concerned that these three human rights defenders have been criminalized and sentenced respectively to 12, 16 and 30 years imprisonment in retaliation for their legitimate human rights work and criticism of the government’s alleged human rights violations, corruption and deforestation,” Lawlor said in her statement.

The rights expert also called out the Lao government for failing to provide the three dissidents with access to proper legal representation, which denied them a free and fair trial.

“To date, none of the above human rights defenders have had access to their lawyers,” Lawlor said.

“The government should also explain the harsh prison sentences handed down to these human rights defenders and how these are compatible with international human rights norms and standards.” 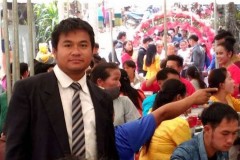 Political dissidents and critics of the government in Laos are routinely given long sentences in prison for criticizing government policies, including alleged cases of corruption during high-profile land reclamation projects that deprive numerous villagers of their homes and farmlands.

Several Lao citizens have in recent years been sentenced to years in prison simply for posting their grievances or those of others on social media.

“The [Lao] government must provide the legal and factual basis behind the arbitrary arrest and incommunicado pre-trial detention of Ms. Lodkham Thammavong, Mr. Soukane Chaithad and Mr. Somphone Phimmasone,” she added.

The case of the three political dissidents has become a lightning rod for many human rights advocates in the region as their jailing is seen as testament to the repressive nature of government in a one-party state of 7 million people, which is one of Asia’s poorest countries.

“The Lao government must stop persecuting its citizens for peacefully exercising their right to freedom of opinion and expression,” Adilur Rahman Khan, vice-president of the International Federation for Human Rights, said earlier in a statement.

“Instead of devoting so many resources to silencing its critics, [the Lao government’s] primary concern should be to address the Lao people’s numerous and legitimate grievances” the rights activist added.