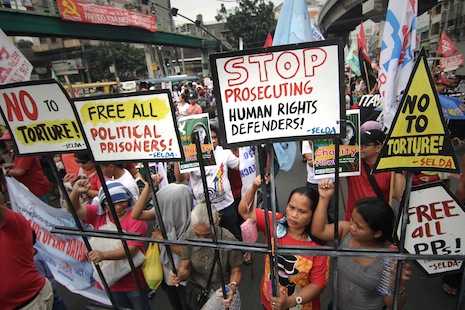 Activists today marked International Human Rights Day with a number of ceremonies and speeches. Several took the opportunity to take the Aquino government to task for its slow response in addressing cases.

"The Aquino administration has made countless commitments to uphold human rights, end impunity, and bring perpetrators to justice, but all that we have so far is mostly rhetoric, not much action," said Carlos Conde of Human Rights Watch.

"The criminal justice system remains paralyzed, cases are barely moving, and most incidents of extrajudicial killings and summary executions (are) not investigated," Conde said to ucanews.com.

It said in a statement: "We hold the Aquino regime accountable for protecting a rotten system that continues to oppress and exploit the Filipino people."

Cristina Palabay, the organization's general secretary, said at least one extrajudicial killing per week has been committed by state security forces under the present administration.

The Task Forces Detainees of the Philippines meanwhile, held a nationwide "solidarity candle lighting" for victims of super typhoon Haiyan on the occasion of International Human Rights Day.

"We devote today’s commemoration … for all those who suffered and continue to suffer the result of climate change and environmental destruction caused by greed, development aggression and government neglect," said Emmanuel Amistad, the organization’s executive director.

The group also called on the government to prioritize the needs of typhoon victims.

"Other future disasters will come, and if the government will not be serious and sincere in performing its duty to protect its people instead of profit and corruption, all these will just be repeated," Amistad said in a statement.

In the southern Philippines, students and activists joined the candle lighting to remember the victims of fighting in Zamboanga City, and the earthquake in Bohol.

"We hope we can help inspire them to stand up and we are with them in struggling to regain what has been damaged and lost from them," said a joint statement of various university student groups.

The presidential palace, meanwhile, said the government is "one with the Filipino people in the belief that the most basic human right is the right to a better life."

Herminio Coloma Jr., Aquino's spokesman, said the government reaffirms its "primordial commitment to the institution of good governance and the eradication of corruption, which provides the foundation for the attainment of inclusive growth and sustainable long-term economic development."