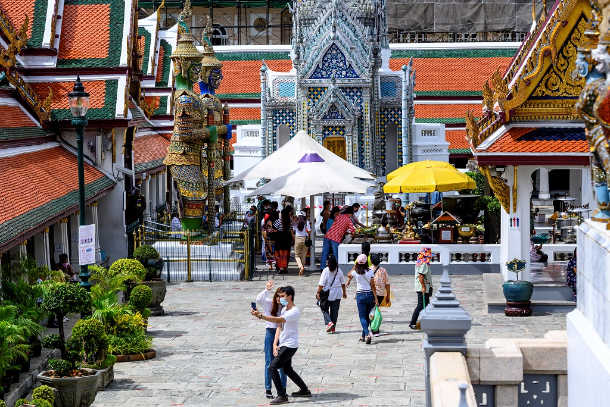 Tourists visit the Grand Palace in Bangkok on June 7 as it reopened for visitors following restrictions to halt the spread of the coronavirus. (Photo: Mladen Antonov/AFP)

Anger and derision have erupted on Thai social media over what is seen as the hypocrisy among the rich and powerful in the country.

Numerous locals took to social media to mock and lambast the country’s pugnacious Health Minister Anutin Charnvirakul when pictures emerged last week of him dining with a large group of other people at a waterside eatery without any social distancing.

Anutin’s ministry has instituted a series of severe restrictions over the past three months on people’s movements and activities in an effort to limit the spread of Covid-19.

“Ironic, isn’t it? We are forced to sit far apart at restaurants, but the same rule doesn’t apply to Anutin,” one irate Thai commented on Facebook.

“They keep telling citizens to stay at home and we obey,” another commenter said. “I haven’t taken my mother and child anywhere for almost three months now, and these pics make me feel really bad.”

Anutin, who is a construction magnate with no background in medicine, grabbed international headlines in March when he took to Twitter to blame Caucasian tourists in Thailand for the spread of the coronavirus from Wuhan, China. His posts were widely decried as racist in their content and tone.

The minister hasn’t been the only influential person who has landed in hot water over their hypocrisy. Several celebrities have been ridiculed for expressing support for the often violent riots in the United States in the wake of the death of George Floyd, an African-American man, at the hands of police in Minneapolis.

Yet these same celebrities, many social media users pointed out, have kept mum about comparable injustices in their own country. Some of them, it was revealed, even cheered on the Thai army in 2010 during a bloody crackdown on pro-democracy demonstrators in Bangkok.

Another commentator took Thai celebrities to task for their silence over the enforced disappearance in recent years of several outspoken critics of the Thai military and monarchy.

“If you really believed in #BlackLivesMatter, you would not forget about the kidnapping of political refugees, the death of Chaiyaphum Pasae, Den Kumlae, Billy Porlajee, Somchai Neelapaijit and Abdullah Isomuso,” argued commenter Warich Noochuoy, listing some of Thailand’s murdered and disappeared political activists by name.

Just last week Wanchalearm Satsaksit, a 37-year-old Thai political dissident, was abducted in the Cambodian capital of Phnom Penh in broad daylight by several men armed with guns. He is presumed to have been murdered. Rights activists have pointed the finger at the Thai army for the murder and disappearance of activists like Wanchalearm.

Last year the badly mutilated bodies of three Thai political activists on the run were found in the Mekong River after they had gone missing from their hideout in neighboring Laos. Their murderers have yet to be found but no serious investigation has been undertaken by Thai authorities to do so.

Such brazen injustices have riled many Thais with liberal sentiments. Yet many of those who have lambasted the US for the murder of George Floyd have remained silent.

“If you really believed in the concept of equality, would you ignore injustices happening right in front of you?” Warich asked.