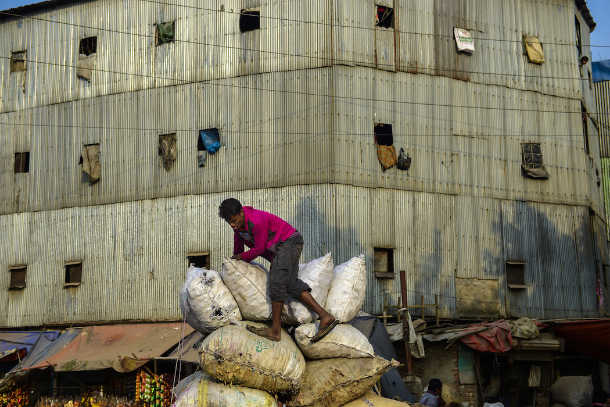 A Bangladeshi worker loads his rickshaw van near the Buriganga River in Dhaka in this file image. Two global studies say the gap between poor and rich continues to widen in the country. (Photo by Munir Uz Zaman/AFP)

The gap between rich and poor people continues to widen in Bangladesh, which also ranks among those countries with the fastest-growing number of very wealthy people, according to two recent global studies.

Bangladesh was ranked fifth behind India, Nigeria, Congo and Ethiopia for extreme poverty, according to the Poverty and Shared Prosperity 2018 report by the World Bank. Next came Tanzania, Madagascar, Kenya, Mozambique and Indonesia.

The report says Bangladesh is home to 24.1 million extremely poor people (out of more than 160 million) who earn less than US$1.90 a day, the international poverty threshold.

This comes against the backdrop of the Muslim-majority country's remarkable progress in reducing its poverty rate in recent decades.

According to the state-run Bangladesh Bureau of Statistics, the poverty rate fell from 44.2 percent in 1991 to about 15 percent in 2016-17 because of 6 percent annual growth during this period.

Bangladesh will record the third-quickest growth in the number of high-net-worth individuals in the world in the next five years, according to a new report by Wealth-X, a New York-based research firm.

The High Net Worth Handbook 2019 provides an analysis of the world's millionaire population (those with US$1-30 million of net worth), which rose by 1.9 percent to 22.4 million people in 2018 and is forecast to increase by another 6.2 percent over the next five years.

The widening gulf between rich and poor shows a disparity in the distribution of wealth and an unfair share of economic dividends in Bangladesh, analysts say.

"It is true that Bangladesh is progressing fast to be a sustainable economy from a lackluster economy. However, the problem is that wealth distribution is not fair enough and discrimination is still high. There is also a tendency of getting rich by adopting illegal and immoral means," Anu Muhammad, a professor of economics at Jahangir Nagar University in Dhaka, told ucanews.com.

Bangladesh still has a long way to go to ensure a fair minimum wage for working-class people, a just taxation policy, expenditure on the social sector and a proportionate increase in employment, he said.

"The economic success story is overshadowed by a manifold rise in wealth disparity, which is dangerous. No progress can be sustainable if we fail to reduce discrimination and the wealth gap," Muhammad added.

"Both reports reflect the reality in Bangladesh. The rich are getting richer by flexing their economic and political muscles, often immorally and criminally, while the poor remain neglected and discriminated. The situation is almost the same in all parts of the country," Das told ucanews.com.

Only a few get rich by honest and fair means, he noted.

"The people who amass massive wealth do it through irregularities, corruption and crimes such as drug peddling and smuggling. They remain above the law thanks to their economic and political clout. The government needs to ensure accountability and good governance and reduce discrimination and inequality," Das said.

The government is committed to poverty alleviation and reducing inequality, said Muhammad Shamsul Alam, from the planning department of the Social Welfare Ministry.

"For a lower-middle-income country like Bangladesh, it is very tough to graduate from the poverty threshold. However, the government is committed to sustainable development for the poor by 2021 with increased socioeconomic spending, and targets complete eradication of poverty by 2030," Alam told ucanews.com.