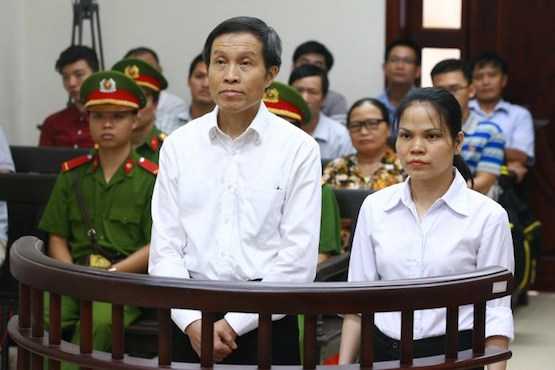 Convicted Vietnamese blogger Nguyen Huu Vinh (center) stands next to his assistant Nguyen Thi Minh Thuy (right) at a court in Hanoi on Sept. 22, 2016, to appeal his five year-sentence for disseminating anti-government articles. Part of a new revised law will mean that anyone in Vietnam can be imprisoned up to five years for criticizing the state. (Photo by AFP)

Legal experts have condemned a revised penal code in Vietnam that requires lawyers to report on their clients in cases deemed a threat to national security.

The National Assembly passed the revised penal code on June 20 which includes provisions (Article 19, Section 3) that a lawyer must report on a client who has committed "national security crimes or other especially serious crimes."

Catholic lawyer Le Cong Dinh, a former prisoner of conscience, said via Facebook that, "Today [June 20] was the most shameful day in the history of law practice in Vietnam when the National Assembly disgracefully passed the penal code."

Another lawyer, who spoke on condition of anonymity, told ucanews.com that the revised code is against lawyers' professional etiquette.

"If the defense reports on their clients, they would be breaking the absolute confidence of their clients and would become spies of the police, instead of protectors of clients," the lawyer said.

He said the revisions target a few human rights lawyers who work for dissidents, rights defenders and activists.

"The human rights lawyers are threatened and harassed by police, and prevented from assessing needed documents and clients," he said.

The lawyer said one typical case concerned Catholic blogger Nguyen Ngoc Nhu Quynh who goes on trial on June 29. Her lawyers were only allowed to meet her in prison on June 20. Her family has not been allowed to see her since she was first jailed in October last year.

"We live in a country where the law is in the hand of rulers who apply them according to their will," Manh said.

"Vietnam considers any criticism or opposition to the government or Communist Party to be a 'national security' matter — this will undermine any possibility of real legal defense in such cases," said Brad Adams, Asia director of the group.

Vietnam has 13,000 lawyers, most of them work for state-run bar associations in provinces and cities.