New book's gripping story from the dark days of dictatorship 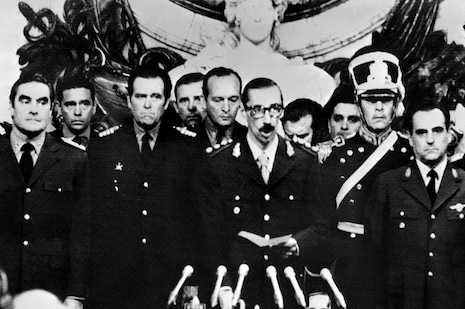 ....No sooner had Bergoglio been elected Pope on 13 March than blogs and newspapers started firing accusations at him, in a hungry attempt to find embarrassing material on Peter’s successor. On the very evening of Francis’ election, Nello Scavo, a journalist for Italian Catholic daily Avvenire started looking into the stories circulating on the web about the Pope having allegedly complicit with the Argentinian dictatorship.

Scavo had no premeditated theories to prove and no hagiographical intentions. As a journalist who focused on legal and judicial issues, he knew that if he could prove the accusations against the newly elected Pope were true, he would be in for a huge scoop.

He also knew that an honest reconstruction of the facts leaves no room for censorship and prejudices.

....The starting line for most of the events the book describes was the Colegio Maximo in San Miguel - in the same area of Buenos Aires Bergoglio used to live – and the nearby Universidad del Salvador, which also had Jesuit ties. This is where Jorge Mario Bergoglio who had not yet turned 40, hosted dissidents who were being hunted down by the military and their thugs, either individuals or groups, passing them off as students  who were attending spiritual exercises.

Many of these men’s lives were in danger so Bergoglio’s rescue strategy involved them being expatriated. From the reconstruction these events it is quite clear that Bergoglio was part of a larger support network of Jesuits across the Latin American Continent who helped distribute expatriation documents to those who needed to get out of the country.

The book’s 192 pages are full of the names, faces and stories of many individuals who were rescued thanks to the future Pope’s actions. The reader can almost feel the desperation of that period of Argentinian history on their own skin.

Scavo paints an eloquent and detailed picture of the consolation and reassurance Bergoglio gave to so many during that dark period. Uruguayan militant Gonzalo Mosca, whom Bergoglio helped flee to Brazil, after giving him some works by Argentine writer Jorge Luis Borges and “a radio so I could stay up to date.”