Rev James Martin tells us why he should be pope

Father Martin has come up with 12 reasons why he should be the one elected. 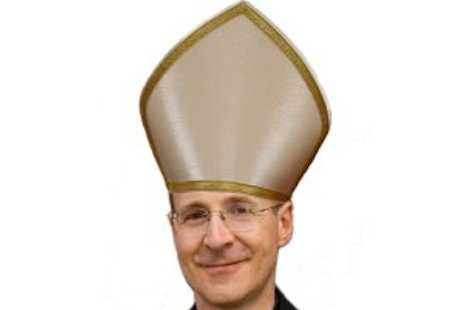 Eminences, I know you've got a tough job coming up in the conclave. You have to do the impossible: elect a guy who is super holy, wicked smart, speaks about a dozen languages and can run an international conglomerate. And if I can be a little blunt, chances are you may not know everyone in the room that day. Especially if you've just gotten that red hat you might be sitting in the Sistine Chapel listening to someone talking in French about aggornamiento and ressourcement and be too embarrassed to say to the guy on your left, "Who's the heck is that?" Besides, everyone sort of looks the same: gray hair, red hat, glasses. It's hard to keep them straight, no matter how many of those handy "Who's Who" charts you might have studied.

So to make things easier, I'd like to suggest a candidate who you might not have thought about but upon a few seconds of reflection you'll know is your man: Me.

2. I'm baptized. And I've got the papers to prove it. No birther controversy here.

3. I speak several languages. Not well, but you know, who does really? I speak English, as you can see from this little essay. And guess what: Bonjour! That's right: French! I started studying français when I was in seventh grade. (Notice I used the little thingy under the "c.") That means I can talk to pretty much all of West Africa and France: that's a lot of Catholics. Unfortunately, if I have to use the subjunctive or the pluperfect we're out of luck, but all I have to do is avoid saying, "If I were" in any of my encyclicals and we're golden.

But there's more: Hola! That's right: I speak Spanish. More or less. Or, "Mas o menos," as we say in the biz. Now, in this case, I can't really handle the past or future tenses, but that's OK, because that means I'll be speaking all about the present -- which will make me sound forceful and confident. You know, "Now is the time!" Or "Ahora es la ... well, ora, I guess." Anyway, there are lots and lots of Spanish-speaking Catholics and once they hear my rendition of "De Colores," they'll be sold on the Servant of the Servants of God muy rapido.

4. I'm half Italian. I almost forgot: Ciao! I'm half Italian. On my mom's side. So once I'm the Bishop of Rome I'll easily be able to deal with any problems in the curia, because all the Italian curial officials will instantly recognize me as a paesan. Scandals? Finito! Mismanagement? Basta! (That's Italian for "done" and "over," in case yours is rustissimo.) My election will also satisfy anyone looking for an Italian pope: i.e., all the Italian cardinals, who you definitely want on your side. The other half of me, by the way, is Irish, which goes a long way in the States, believe you me.

5. I worked in Africa. I almost forgot my other language. Jambo! That's right! I speak Swahili. Or Kiswahili. (That's Swahili for Swahili.) Well, at least I used to. I worked in Kenya for two years. So for all those people who want a pope from the developing world, well, I'm not exactly from there, but there are three babies who were named after me while I was working in Kenya. (They're not mine, if that's a worry.) That's got to count for something.

Now that you know that I speak English and Spanish and French and Swahili, you're probably thinking, "Gee, why not Jim as the Pontifex Maximus?" Why not share that thought with the guy in red sitting next to you?

6. Books. You probably want a pope who is literate but maybe not someone who spends so much time writing books, what with all the stuff he has to deal with. I know that this was sometimes a criticism of Pope Benedict XVI -- not that I'm casting any stones! But I've already written my books, so when I'm in the Vatican I'll be 100 percent on the job. Nine to five. Weekends too, if things ever get really busy. Sundays, of course, I'll be available for Masses.

7. Business experience! Speaking of jobs -- guess what? -- I've got a degree from the Wharton School. That's one of the big business schools here in the States. Plus I worked at General Electric for six years. So here's some good news: say arrivederci to any managerial problems in the curia. Ever heard of Management by Objectives? The marginal propensity to consume? The "Four Ps" of marketing? You will after I'm Supreme Pontiff. That place will run like a top. A top that makes money, too.

8. I'm ordained. I almost forgot: I'm already an ordained priest. That means that, since I meet all the other requirements, the only thing that left is for me to be willing to be ordained a bishop. And guess what: I'm willing. Now let me anticipate a minor objection. I'll bet that you know that I took a vow as a Jesuit not to "strive for or ambition" any high office in the church, but I've got a nice, easy, canonically doable way around that roadblock. Once you elect me pope, I'll be my own superior! After I put on those white robes, I can just call up the Jesuit superior general and say, "Hey, how about letting me accept that ordination as bishop and my election as pope?" And I figure he'll have to say yes because he takes orders from me. Problem solved. Besides I'm not striving or ambitioning anyway. I'm campaigning.

9. Educated. The Jesuit training process is really, really, really long. I can't even remember how many years I was in studies. That means that I studied philosophy (good to know), theology (really good to know) and a whole lot of other stuff like church history, which I think would be pretty helpful as pope. And guess what? I know Ancient Greek, too. That really impresses the scholarly types in the church. E.g., when scholars ask me, "What translation of the New Testament are you using?" I'll say, "My translation." They love that kind of thing. Plus, that appeals to the Ancient-Greek-speaking demographic that the church may have given up on.

10. Willing to travel. OK, I admit it. I'm not all crazy about air travel, what with all the delays and having to take your shoes off and sitting next to someone who keeps coughing up a lung, but it just dawned on me that this won't be a problem at all. The Pontiff has his own airplane: Shepherd One. So once you install free movies in my gold-and-white plane I'm golden. I'll go wherever you want me to go. To the ends of the earth, if need be. As long as I get an extra bag of peanuts.

11. Humility. I can already predict what your last objection is: My campaigning for pope may make me seem a tad less humble than you might hope for. But isn't the fact that I'm willing to campaign a sign of my humility? A less humble guy would assume that everyone already knows that he'd be a good candidate and so wouldn't say anything out of his pride. Kind of counterintuitive, huh? Ergo: Since I'm campaigning, I'm No. 1 when it comes to humility.

12. Cool Name. Everyone knows that the first big decision the pope makes is his choice of name. Plus, I know everyone's always worried about continuity. With that in mind (I like to think ahead, which is a good trait) I've already picked my name. As you know, Pope Paul VI's successor chose the name "John Paul I," to show his continuity with Pope John XXIII and Paul VI. Everyone was pretty impressed with that. Next you had John Paul II. More continuity. And of course next we had (or have, depending on when you're reading this) Benedict XVI. If you elect me, and I hope you will, after I say "Accepto" (see I speak a little Latin too), I would choose my name: John Paul Benedict I. That takes care of everyone from John XXIII to Benedict. Continuity plus. Of course saying "JPB1" might take some getting used to but Catholics are pretty flexible, and I'll bet before long there will be lots of babies baptized John Paul Benedict.

Anyway, I hope that helps you make a tough decision easier, Your Eminences. Did I leave anything out? Well, I'm a fast typist, I can draw pretty well and I tell some really funny jokes. For example, here' s a good one: "What did the Jesuit say when he was elected pope."

There's only one way to find out.

Full Story: 12 Pretty Good Reasons Why I Should Be Pope