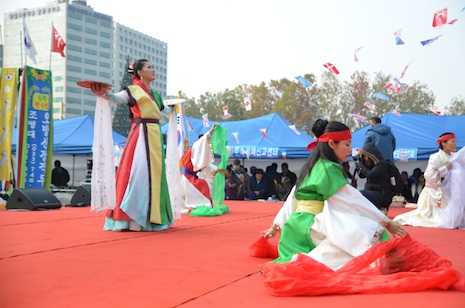 For some, the word “shaman” may conjure up exotic images of animal skins, human bones and hallucinatory potions. But in Korea, the shaman is a much more pragmatic – if still supernatural – figure.

Shamanism is one of the country’s earliest forms of religious practice rooted in the agrarian society of Korea’s early dynasties.

The introduction of Buddhism, Confucianism, and Taoism eroded its popularity, and while it has been relegated in modern times to little more than superstition, shamanism continues to influence the attitudes and religious practice of many Koreans.

Shamans, called mudang, hold gut ceremonies to cleanse evil spirits, to promote good health or well-being and to usher the spirit of the dead to the next life.

The ceremony has, in recent times, also been hailed as a valuable cultural artifact.

It is this connection to Korean nationalism, as well as its abiding social and cultural influence, that has led some in the country to seek a more prominent place and a healthier respect for Shamanism.

On November 23, the Committee for the Day of Shamans gathered about 300 shamans at Seoul Plaza in front of City Hall to pledge to regain social respect for shamanism as a formally recognized religion.

The group announced that from next year it would commemorate Shaman Day on September 9. It added that Korea celebrates two religious holidays – Christmas and the Buddha’s birthday – and that shamanism also deserved such recognition.

“Shamanism is a native religion of Korea since its national foundation, and it has played a pivotal role in helping people,” said Lee Seong-jae, one of an estimated 200,000 practicing shamans in the nation of about 50 million people.

“However, we have been kicked out by foreign religions that distort and derogate.”

Recent surveys have found that about 23 percent of South Koreans state their religion as Buddhist, while 18 percent are Protestants and 10 percent are Catholics. The survey excluded shamanism among the choices.

And yet some 40 percent of South Koreans – many of them Buddhists and Christians – say they regularly consult fortune tellers, according to a Gallup Korea poll last year.

Until the end of the Goryeo dynasty in 1392, September 9 marked a shaman festival that included ritual sacrifices of food, ceremonial dancing and prayers for good fortune.

Lee said he and fellow shamans hope to reinstitute the festival for the benefit of all people.

“With establishing this day, we will start to regain our religious identity and get united to be a native religion in Korea to help poor and alienated people,” he said.

But one shaman admitted that some modern practitioners cared more about money than maintaining the roots of a historic religion, and that honoring the legacy of shamanism might well be done even if Shaman Day does not earn formal recognition as a national holiday.

“As priests serving gods, the first step to regain our social respect is stopping those practices by purifying ourselves. The Day of Shamans can help unite us and spread our good image to people.”