Residents of resort island in the Philippines face eviction 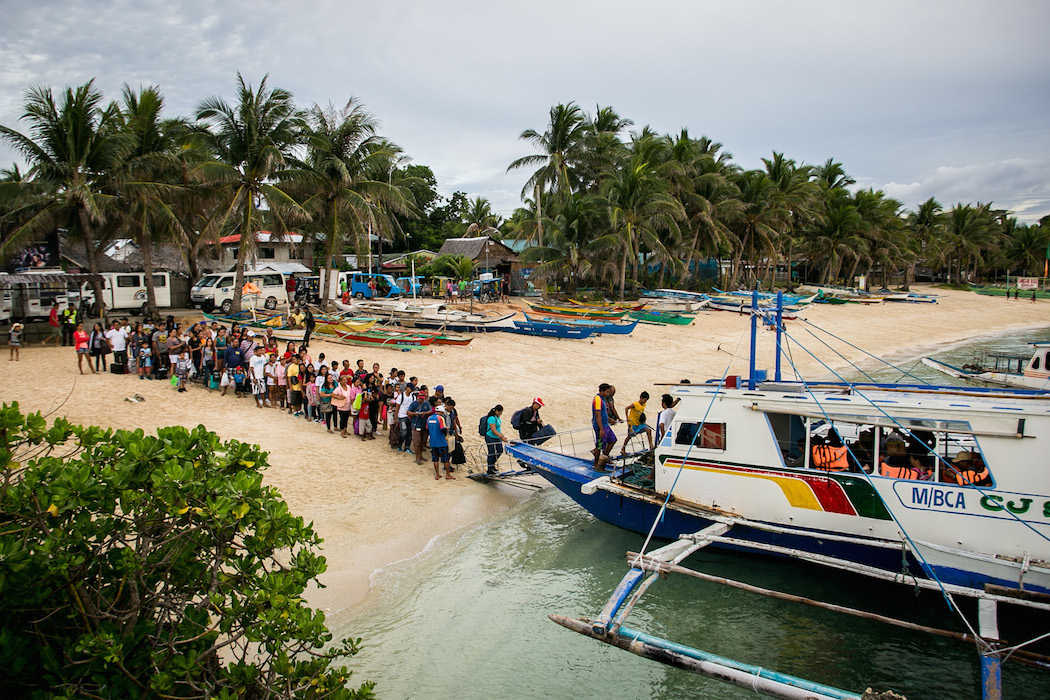 Residents of Boracay Island board a boat bound for the mainland in Aklan province on June 3. Over 400 families living on the island face eviction because of the government's rehabilitation program for the island. (Photo by Mark Saludes)

Residents of Boracay, a small island in the central Philippines known for its resorts and beaches, are facing eviction as the government implements what it describes as a rehabilitation program.

At least 426 poor families have already received eviction orders from the Department of Environment and Natural Resources.

A Catholic fact-finding mission on June 2 found that at least 30 percent of householders facing displacement are original inhabitants.

Monsignor Meliton Oso, social action director for the Archdiocese of Jaro, expressed shock that legitimate residents were being ejected from their homes.

The priest said it was frustrating that the government allowed the construction of businesses on Boracay, but expelled those who could not raise their voices or engage in legal battles.

President Rodrigo Duterte earlier this year ordered a six-month tourism shutdown on the island because of pollution and threats to the environment posed by resorts and other establishments.

Following the closure of the island on April 26, the government also ordered people living in some still forested areas to leave.

Estelita Mariano, an 80-year-old mother of 14, said her family has been living on the island for generations, but had not been able to secure a land title deed.

"Our parents and grandparents were not aware of land titling," Mariano said.

"They were fisher folk and farmers long before the businessmen came here."

The Environment Department said only a third of the island, or about 292 hectares, has legal ownership and that it belongs to one family that started securing titles in 1931.

"All other claimants only have tax declaration documents as proof of ownership," said lawyer Richard Fabila, head of Boracay's Community Environment and Natural Resources Office.

He said his office would not evict residents until a relocation site was found.

"We are going after illegal settlers on wetlands who obviously pollute our mangrove areas," he said.

He said evicting the original settlers was tantamount to their disenfranchisement and denial of both livelihoods and land rights.

At least 36,000 workers have reportedly lost their jobs since the closure of the island, according to the activist group Rise Up Aklan.

Father Gariguez said his office has already allocated about US$6,000 to assist in the education of affected children in at least one school.

"We still have to look for resources to help children whose parents lost their jobs because of the shutdown," said the priest.

"We have to assist them to ensure that their rights are not violated."

The government should conduct "comprehensive profiling" of affected residents.

Boracay, a small island located about 320 kilometers south of the capital, Manila, is known for its white beaches and beautiful sunsets.

In 2012, Travel and Leisure magazine ranked it as the "world's best island" but there has since been international exposure of myriad pollution and other environmental problems.