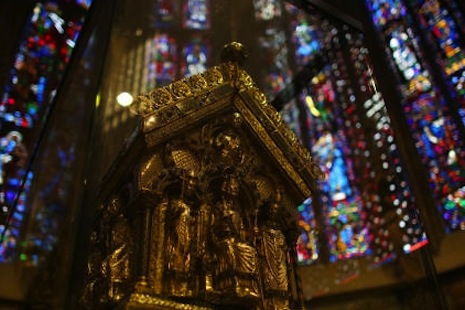 Charlemagne's gilded sarcophagus in Aachen Cathedral, which housed most of the emperor's bones (photo by DPA)

Researchers confirmed on Wednesday evening – 1,200 years to the day since Charlemagne died – that the 94 bones and bone fragments taken from the supposed resting place of the King of the Franks and founder of what was to become the Holy Roman Empire came from a tall, thin, older man.

The team first opened the sarcophagus of the first emperor in western Europe since the fall of the Roman Empire in secret in 1988 and presented their results for the first time on Wednesday.

One of the scientists studying the remains, Professor Frank Rühli, said: "Thanks to the results from 1988 up until today, we can say with great likelihood that we are dealing with the skeleton of Charlemagne."

From studying the dimensions of the upper arm, thigh and shin bones, scientists have built up a picture of the man behind the skeleton, and it matches descriptions of Charlemagne.

At 1.84 metres, he was unusually tall for his time. The team also estimated his weight at around 78 kilograms, giving him a slim body mass index of around 23.

Previous estimates had placed his height at between 1.79 metres and 1.92 metres.

And an account from medieval Frankish biographer Einhard the Frank claiming Charlemagne walked with a limp in old age could well be accurate, as both kneecap and heel bones had deposits consistent with an injury.

No new evidence was found to corroborate accounts that he died of pneumonia as researchers discovered no strong clues as to Charlemagne's health at the time of death.