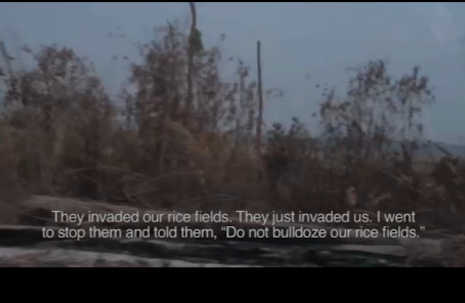 By Kate Hodal and Chris Kelly for The Guardian

Two Vietnamese firms bankrolled by Deutsche Bank and the International Finance Corporation – the World Bank's private lending arm – are leading a wave of land grabs in Cambodia and Laos, causing widespread evictions, illegal logging and food insecurity, according to a report.

The study, concluding a year-long investigation by the watchdog Global Witness, names two of Vietnam's biggest companies, the privately owned Huang Anh Gia Lai (HAGL) and state-owned Vietnam Rubber Group (VRG), as the businesses behind the land grabs. It claims they are working with the explicit support of the Cambodian and Laotian governments, who have authorised the land developments.

"We've known for some time that corrupt politicians in Cambodia and Laos are orchestrating the land-grabbing crisis that is doing so much damage in the region," said Megan MacInnes, head of Global Witness's land team, in a statement. "This report completes the picture by exposing the pivotal role of Vietnam's rubber barons and their financiers, Deutsche Bank and the IFC."

Global Witness researched land deals between the two governments and the firms, and found that HAGL and VRG had together been handed more than 200,000 hectares (nearly 500,000 acres) of land, including protected forest with rosewood, in which to grow rubber.

Land was often sold without villagers' consent or knowledge and without compensation, the report alleges. Families were forced off their land or expected to work for the rubber plantation, although jobs were few and far between.

"When they resist, communities face violence, arrest and detention, often at the hands of armed Cambodian security forces who are on the investors' payroll," the report claims.

Villagers in Laos and Cambodia have made similar allegations to the Guardian, describing, on camera, threats of violence, food insecurity, and apparent impunity on the part of the companies. "They invaded our rice fields. They just invaded," said one villager in Laos who lost her land to a HAGL concession. "I went to stop them and told them: "Do not bulldoze our rice fields … They said: 'Why should we stop? The government granted them to us'," she said, speaking on condition of anonymity.

Another Lao villager who also lost his land to HAGL, said: "We lost about 60% of our rice fields – the company bulldozed all of them. Our village's graveyards were [also] completely bulldozed … They did not compensate us for anything."

Those who did complain to the government were told not to bother, as the companies were acting within their legal right, said a villager in Cambodia, who lost his land to VRG.

"We used to file complaints but the forest administration explained to us that we didn't need to protest … [that] it's a waste of time," he said. "The company is legal. They're not a private company operating on their own."

Land is a particularly contentious issue in Cambodia and Laos, as few people have deeds to their property. In Cambodia private property was wiped out by the Khmer Rouge, while in Laos all land technically belongs to the state.

According to Global Witness's investigation, HAGL and VRG's operations in Cambodia and Laos are being funded, either directly or indirectly, by Deutsche Bank and the IFC.

The report alleges the IFC invested $14.95m in a Vietnamese fund that holds 5% equity in HAGL, while Deutsche Bank owns some $4.5m-worth of HAGL shares. Deutsche Bank is also said to have 1.2m shares in a subsidiary company of VRG amounting to more than $3m.

HAGL and VRG are huge players in the Vietnamese domestic rubber market but have tapped their land supplies dry. They have consequently set their sights further afield, expanding their operations to Cambodia and Laos, two of south-east Asia's poorest nations that also happen to be hungry for investment.

Current figures show that Cambodia has leased nearly three-quarters of its arable land – 2.6m hectares – in economic land concessions (ELCs), 80% of which were turned into rubber plantations, and 14% of which went to Vietnam.

Five of Cambodia's most powerful tycoons were the primary recipients of these ELCs, the report alleges, which also claims that 70% of those ELCs handed out in 2012 were located in national parks, wildlife sanctuaries and protected forests.

In both countries, the Global Witness report alleges, many of the ELCs are contravening both countries' laws and are directly causing deforestation.

"When people have attempted to get their land and forests back, they have been threatened, detained and even shot at by security forces on the payroll of concessionaires," the report claims.

Those implicated in the allegations have denied wrongdoing. In a statement sent to Global Witness and seen by the Guardian, VRG said it had a licence to operate in Cambodia and Laos and claimed to "absolutely observ[e] national legal regulations of the host country".

HAGL released a statement confirming that the company's subsidiaries invested in rubber plantations in each country but the firm "denies seizing land, illegally exploiting wood and other corruption [sic] behaviours in Laos and Cambodia".

"The DWS fund shares referred to are held on behalf of investors. Deutsche Bank provides only clerical trustee services to HAGL, as it does to thousands of listed companies globally."

In a written response to Global Witness seen by the Guardian, the IFC confirmed its shares in HAGL and said: "IFC works with financial intermediaries, such as funds, because they can contribute to sound, inclusive, and sustainable financial markets that are essential to eradicating poverty and job creation."

It continued: "We ensured that [the investment fund used to buy shares in HAGL] … demonstrated a commitment to environmental and socially responsibility."

When asked about ELC operations in Cambodia's rubber plantations, a spokesman, Beng Hong Socheat Khemro, of the land management ministry, and Chan Sarun, minister of agriculture, both declined to comment.

Vietnam accounts for one-third of the world's rubber market, which is dominated by the production of tyres and tyre products.

Cambodia is an increasingly dominant player in this production, where rubber exports bring in some $200m a year and make the nation the world's ninth-largest natural rubber producer.

This year, Cambodia's prime minister, Hun Sen, said he hoped one in every 10 Cambodians would soon be working in rubber and predicted a rapid growth of the industry.