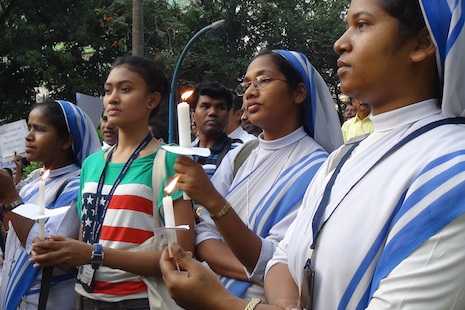 A new report on religious freedom in India paints a grim portrait of relations between the majority Hindu population and its smaller religious minorities.

India is struggling to protect minority religious communities including Christians, Muslims and Sikhs from increased violent attacks and a “climate of impunity”, according to the report by the US-based Commission for International Religious Freedom (CIRF).

The commission lists India as a Tier 2 country, alongside such nations as Afghanistan, Kazakhstan and Laos.

The report further notes that incidents of violence against religious minorities have increased for three consecutive years, peaking last year during national polls that were won in a landslide by the Hindu nationalist Bharatiya Janata Party (BJP).

“Since the election, religious minority communities have been subject to derogatory comments by politicians linked to the [BJP] and numerous violent attacks and forced conversions by Hindu nationalist groups, such as the Rashtriya Swayamsevak Sangh and Vishva Hindu Parishad”, the report said.

Law enforcement responses to violence also fell under scrutiny in the report.

It further recommended repealing all existing anti-conversion legislation, and improving training on human rights and religious freedom among the police and judiciary — particularly in states that have a history of religious or communal violence.

“These are excellent recommendations, and every Indian conscious of human rights and dignity would welcome them,” said Fr Ajay Singh, a Catholic priest and rights activist who has worked among the victims of the 2007 anti-Christian riots in Odisha.

Fr Singh said seven Indian states have adopted laws that make the changing of one’s religion without permission from the government a crime, adding that these so-called Freedom of Religion acts were “laws that no civilized society will accept”.

ET Mohammed Basheer, a member of the Indian Union Muslim League, said that ever since the BJP government led by Prime Minister Narendra Modi came to power, “fanatic elements in the country have been let loose”.

The government has weakened the established institutions of the country and diluted the nation’s secular fabric, Basheer said, and has dismissed violence against minorities as random acts of crime.

“But when a crime against a religious minority goes unpunished in an atmosphere of hate, impunity increases and violence becomes more frequent.”

However, BJP leader and parliamentarian Vinay Katiyar dismissed the report as “uncalled for” and “biased”.

“We strongly condemn the … biased report by the CIRF. India enjoys religious freedom enshrined in our constitution. Minorities have had no problems,” he told ucanews.com on Thursday.

The report, Katiyar said, provides only an observation of “stray incidents and taking cognizance of media reports which are basically based on sensationalism”.

Christian leaders have adamantly dismissed claims by authorities that attacks on their communities are simply a law and order issue.

Six churches have been vandalized by Hindu mobs since December last year, along with several other anti-Christian attacks across the country — including the rape of an elderly nun earlier this year.