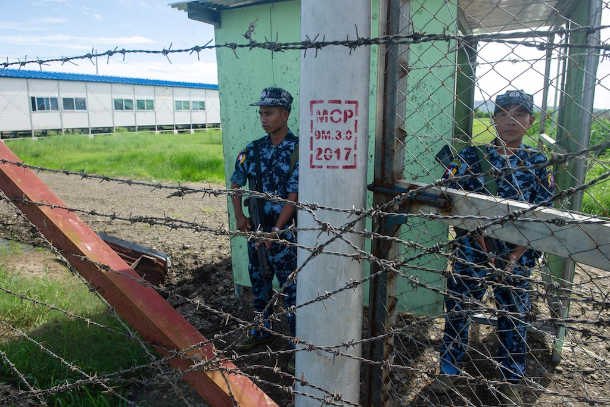 Myanmar's military made extensive and systematic preparations for attacks on Rohingya before an August 2017 clampdown in northern Rakhine State, an international rights group has claimed.

Fortify Rights has documented mass killings, rape and arson attacks against Rohingya and has called on the United Nations Security Council to urgently refer the situation in Myanmar to the International Criminal Court (ICC).

Matthew Smith, chief executive at Fortify Rights, said genocide doesn't happen spontaneously. "Impunity for these crimes will pave the path for more violations and attacks in the future. The world can't sit idly by and watch another genocide unfold, but right now that's exactly what's happening," he said.

The report revealed details of systematic preparations that began in October 2016, including the collection of sharp or blunt objects from Rohingya civilians, training and arming local Rakhine communities, depriving Rohingya civilians of food and other aid to weaken them prior to attacks and deploying unnecessary state security forces in northern Rakhine.

Fortify Rights says the dominant narrative accepted internationally about what occurred in northern Rakhine is that attacks by Rohingya militants in August 2017 instigated a spontaneous military crackdown that resulted in nearly 700,000 Muslims fleeing to Bangladesh.

"This report documents and reveals a sinister subplot: Myanmar authorities made extensive and systematic preparations for the commission of mass atrocity crimes against indigenous Rohingya civilians during the weeks and months before Rohingya militant attacks on August 25, 2017," Fortify Rights says in the report.

A Rohingya resident in Maungdaw township said he saw ethnic Rakhine communities being given swords and other weapons. "I have no doubt about the report as it reflects the reality of the situation of Rohingya who have long faced discrimination and persecution," he told ucanews.com.

Hla Tun Kyaw, an ethnic Rakhine and a lower-house MP for the Arakan National Party, said the report had no concrete evidence and was based on one-sided views from people who fled Rakhine. He said Rakhine people carry swords just for self-defense but it was not true that local authorities provided them with weapons.

"International rights groups are attempting to refer Myanmar's military to the ICC by applying pressure continuously — it is their goal," Hla Tun Kyaw told ucanews.com.

In late June, the ICC gave Myanmar a July deadline to submit its observations on the court's jurisdiction regarding refugees crossing the border to Bangladesh.

Myanmar's government and military have yet to respond to the Fortify Rights report.