People hold a candlelight vigil in Ahmedabad on Feb. 28 to commemorate the 19th anniversary of the Gujarat riots of 2002. (Photo:  Sam Panthaky/AFP)

The ruling Bharatiya Janata Party (BJP) and Vishwa Hindu Parishad (VHP) are at loggerheads in the western Indian state of Gujarat, known as the original laboratory of Hindutva.

Interestingly, the reason for the quarrel is a church, which has become a bone of contention between the ideological partners of the Hindutva project that seeks to define India in terms of Hindu values.

It all began with a story carried last month by a Gujarati daily newspaper about a church constructed in Amba Jungle village with the “blessings” of Hiraben Mahala, a BJP member of the Kaprada taluka panchayat (a block-level administrative division) in the southern tribal district of Valsad.

The report said Hiraben had promised to build the church in lieu of votes from tribal Christians during the local civic body polls held in March 2021. The BJP swept the polls, routing the rival Congress party.

Hiraben denied the report, saying the church in Amba Jungle was erected years ago. “I was in school when this church was built here. How can I be held responsible?” she told UCA News.

Hiraben, who hails from the village located 65 kilometers from the district headquarters in Valsad, sought to clarify that she was herself a Hindu but admired Christians.

In fact, her husband Prabhubhai Mahala had stopped construction of the church on government land when he was the village head of Amba Jungle years ago. “It was then shifted to private land. This story is only to malign me as I won the election. It is a political allegation,” she added.

Her version was supported by Amrut Kardaley, the present village head of Amba Jungle. “It is a baseless allegation. The reporter who filed the story did so based on hearsay and without verifying facts. He is an embedded reporter with the VHP,” he told UCA News.

The statements had little impact. Local political circles were agog with rumors that several BJP candidates had made similar promises to tribal Christians in the area to win their votes.

This irked VHP functionaries who have been running a campaign for decades to drive out missionaries from Gujarat’s tribal belt. 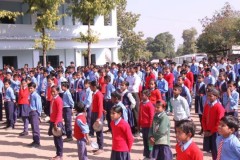 The Gharwapsi campaign to lure tribal Christians to the Hindu fold is in full swing in the area. One such programme was held on July 25 at Vapi and 105 tribal people reportedly embraced Hinduism.

There is no denying that the BJP’s newfound love for Christians helped the party to defeat the Congress party in its traditional tribal strongholds of Valsad and Dangs in the state by-elections held in November 2020.

BJP candidates suffered defeats in elections in Gujarat for decades, mainly because of the tribal Christian vote.

The animosities between Christians and proponents of Hindutva run deep in Gujarat’s tribal belt, which witnessed targeted violence against the minority community culminating in attacks on churches in neighboring Dangs district on Christmas Day in 1998.

Violence erupted again in 2006 when Swami Aseemanand — a controversial monk and former activist of the pro-Hindu Rashtriya Swayamsevak Sangh (RSS) who was arrested and released in countrywide bomb blast cases reported in 2006-07 — began reconverting tribal Christians.

I cannot say anything about this ‘church for votes’ episode, but I can definitely say large-scale conversions are still happening in this part of Gujarat

In the 2017 state assembly elections, Jitubhai Chaudhary of the Congress won with a margin of less than 300 votes in Kaprada constituency. Then he resigned and joined the BJP and won the by-election with a margin of 46,000 votes.

Such was the case with Vijaybhai Patel, the BJP candidate in Dangs constituency. In 2017, he had lost to his Congress rival by about 800 votes, but he won the by-election in 2020 by more than 60,000 votes.

But the RSS, parent organization of both the BJP and VHP, isn’t happy.

Vijay Goel, the chief of the RSS’ Valsad district unit, said: “I cannot say anything about this ‘church for votes’ episode, but I can definitely say large-scale conversions are still happening in this part of Gujarat.”

The VHP is demanding that the church in Amba Jungle be demolished.

Christians face ire for no fault of theirs. They are used as pawns in the political games by RSS-BJP

There should also be a survey to detect similar cases of illegally constructed churches in the area, said Ajit Solanki, president of VHP’s Valsad unit.

“There are churches in areas where not a single Christian lives. Why are the churches there? They must be flattened immediately.”

Punabhai Gavit, a Congress legislator from Vyara who is also a pastor with the Church of North India, is planning to visit the area to take stock of the situation and defuse the tension.

“This is a regular feature here. Christians face ire for no fault of theirs. They are used as pawns in the political games by RSS-BJP,” he told UCA News.

The tribal belt of Gujarat is dotted with Catholic-run schools, hospitals and other social service institutions. It is they who end up bearing the brunt of the sustained campaigns against so-called evangelization.

A concerned Father Xavier Manjooran, who heads a legal aid center at Songadh, said outfits like the VHP can hardly differentiate between Christian denominations or welfare and conversion activities.

Father Manjooran, who has worked in the tribal area for more than three decades, said the RSS and its many outfits tend to equate efforts to educate and empower tribals with proselytization, which is far from the truth.