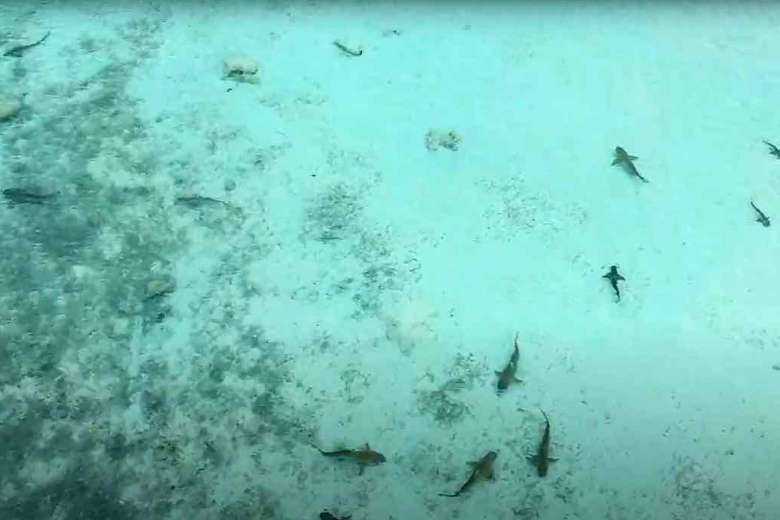 Blacktip sharks swim in the shallow waters of Maya Bay on Thailand's Koh Phi Phi Leh island, off the Andaman coast. Marine life was slowly restored in the past two years when the beach was closed to tourists. (Photo: AFP)

At the edge of the turquoise water, Asian and European tourists take the pose. They had come to attend, in early January, the long-awaited reopening of Maya Bay, the jewel of the Andaman Sea, after three years of closure.

"We hoped that there would be no one here for the first day," says Maïka, a Malagasy tourist. "But it's a mythical beach, everyone wanted to come, of course.”

Off the island of Koh Phi Phi, with its crystal-clear waters and vegetation-covered limestone hills, Maya Bay — the name comes from the Sanskrit word "Maya," meaning illusion, which in one Hindu tradition denotes the cosmic force through which the universe manifests itself to human beings — is considered one of the most beautiful beaches in the world.

It was used as a backdrop for the film The Beach, released in 2000 with Leonardo di Caprio and Virginie Ledoyen.

Maya Bay received nearly 5,000 visitors and more than 200 boats each day. Its marine ecology became the victim of its success and mass tourism: the coral reef was severely damaged, fauna and flora withered.

In 2018, the government closed the bay for ecological recovery. The restoration efforts continued for three years. Scientists from the Coral Reef Conservation Center set up "coral nurseries" near the bay and facilitated underwater spaces dedicated to the cultivation of tiny plants. Local communities have mobilized to save their environment.

This is great news. After three months of closure, we had already seen considerable progress on coral and marine life

"As soon as the plants were big enough, local divers volunteered to go and replant them in Maya, in places on the reef that had been completely destroyed by motorboats," explains Niklas Hartman, a diving instructor based on Koh Phi Phi.

Some species of fish have been reintroduced, others have returned on their own, such as blacktip sharks, an indicator species for healthy marine ecosystems.

Scientists say they have been surprised by how quickly nature has reclaimed its rights.

"This is great news," says Anuar Abdullah, director of the NGO Ocean Quest Global. "After three months of closure, we had already seen considerable progress on coral and marine life. This is proof that it is not too late in many other places in the world."

In view of these good results, the government reopened the bay on Jan. 3, notwithstanding divergent views. The reopening came earlier than expected in 2023. Ecologists fear the return of the tourists will ruin everything again, but the majority of the locals believe that "business must resume.”

"Maya attracts visitors — we need them to survive," says a boat driver at the port of Tongsai.

Through the example of Maya Bay, it is the whole question of the new Thai tourism model that is posed — between the necessary return of tourists for the economy and the desire to preserve the environmental benefits of the pandemic.

In Maya, the authorities have chosen to impose restrictions: boats no longer have access to the bay, visitors must arrive by the back of the islet and access the beach after a short walk. Each tourist is only allowed to stay for one hour, with a maximum of 375 tourists per hour. Most importantly, swimming is now prohibited.

"We are trying to implement new tourism practices," says Yongyuth Pradert of the national parks department. "We have installed guards to watch over the beach."

He points out that the greater emphasis on wilderness necessarily comes at the expense of certain practices, especially those prized by European tourists, such as swimming. "Today, there are sharks, so it would be too dangerous anyway."

This "new normal" of tourism, as described in a government directive, commits to promoting tourism practices more “modeled on local lifestyles.”

In addition to environmental concerns, the Thai government wants to rethink its tourism in the context of a world now prone to epidemics and quarantines.

Its Sandbox program on the islands of Phuket and Samui is unique. It allows travelers to spend seven nights in these beaches without undergoing mandatory quarantine. Tourists are allowed to move around freely after a first negative test. They can go to the beach or to restaurants, while the local population has been subject to priority vaccination efforts.

The Thai government is also keen to promote domestic tourism, subsidizing through various programs up to 50 percent of hotel room rates for Thais

Some hotels even offer "themed" quarantines, centered around wellness, beauty treatments or meditation practice. Thailand, whose traditional massage has been classified as an intangible heritage by UNESCO, can capitalize on its image of well-being, one of the major axes of development of the sector.

It is also a question of encouraging long-term visitors, for whom a week of quarantine is not an obstacle. The focus has recently been on digital nomads, a growing community with the rise of telecommuting.

Kho Pha-ngan island in the southeast has made a specialty of attracting this new clientele, with low-rent houses for rent, good internet connections and a diverse, high-quality restaurant offering.

Communities of young web workers (web designers, content moderators, video editors), attracted by the multitude of yoga centers and other practices that focus on physical and mental well-being, and by easy payment in cryptocurrencies in some establishments, have flocked to the island in recent months.

The Thai government is also keen to promote domestic tourism, subsidizing through various programs up to 50 percent of hotel room rates for Thais.

A whole new category of people from the provinces has started to travel for the first time. Their presence, now in the majority in places previously confiscated by international tourism, is profoundly changing the face of places. It also changed what is offered to consumers, such as fewer bars, pushing some Thai television editorialists to talk about "decolonization.”

The government has just announced the reduction of the quarantine period to two days (the first and fifth day while PCR tests are carried out) starting in February for arriving travelers from abroad.