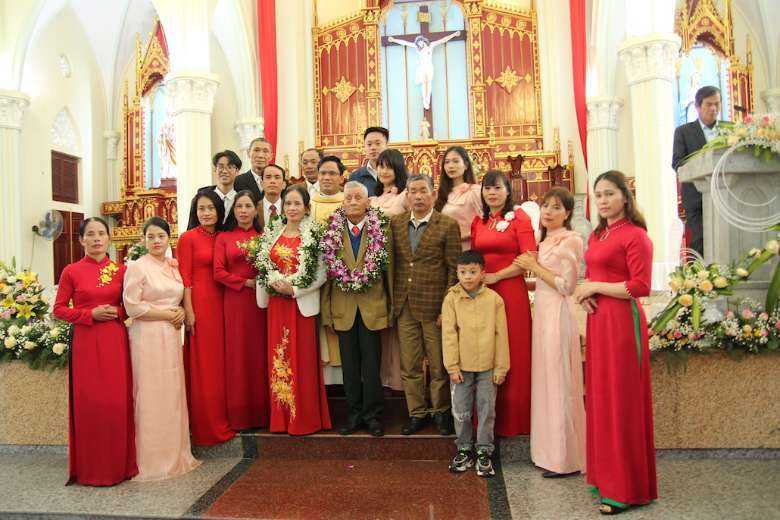 Catholics in a northern Vietnamese parish who have survived long wars and endured pain and suffering are celebrating the ordination of the first priest from the community in its 85-year history.

Some 10 priests joined Sacred Heart Father Joseph Bui Ngoc Bao in a special Mass on Jan. 22 to give his heartfelt thanks to his home Quan Hao Parish in Yen Bai province. Some 500 people attended the glittering ceremony held at Immaculate Church in cold weather.

Father Bao was among the congregation’s seven priests and six transitional deacons ordained by Archbishop Joseph Nguyen Chi Linh of Hue at its headquarters in Hue on Jan. 12.

Before the Mass, people marched in procession playing drums and trumpets and singing melodious hymns around the church decorated with colorful candles and flowers.

"Today is a blessed day. I would like to give my deepest congratulations to Father Bao, your family relatives and the parish because God loves all of you and offers you the first priest since you moved here 85 years ago," Father Hong said.

The priest said newly ordained Father Bao is the first fruit of considerable sacrifices and fervent prayers of countless people who have worked to develop the parish.

"May you be filled with holy wisdom and enthusiasm on your missionary path as God desires," he told Father Bao.

Dominic Dang Tien Lanh, head of the parish council, said local Catholics are extremely proud of the first priest ever produced by the community.

Lanh said 59 Catholic families with 250 members moved to the mountainous area in 1937 from Quan Phuong Parish in Nam Dinh province, which was the cradle of Catholicism in northern Vietnam. They formed Quan Hao Subparish and were given pastoral care by Paris Foreign Missions Society (MEP) missionaries.

The subparish at first belonged to Phuc Loc Parish that disappeared during wars in the 1960s, but later it became part of Yen Bai Parish until 2011 when it became a separate parish.

The lay leader said the parish has produced 10 nuns who work in some dioceses, although it has never had a resident priest.

“We are in seventh heaven about our son’s ordination. God does not abandon but offers his grace to our family and the whole parish, who remain faithful to the church in hard times,” said Joseph Bui Duc Ban, father of Father Bao.

Ban, 86, said his parents and others were asked to move to the area in 1937 when he was two years old. They worked in plantations and built bridges and roads in the remote area, 400 kilometers away from their homes, but lacked food throughout the year. In the early years, many died of starvation and illnesses while others returned to their homes.

Wars raged for decades but about 100 Catholics consistently gathered to pray at chapels without priests until the 1990s when priests visited from other areas to serve them. Since then, people from elsewhere have moved to live in the area.

Father Bao, 42, said he returned home to celebrate the thanksgiving Mass and pray for local people who support his religious vocation. He has six siblings and his mother died seven years ago.

The priest said he has experienced the disadvantages and suffering local people suffer, so his top priority is to evangelize in northwestern provinces where people including ethnic groups suffer a severe lack of priests.

He hopes his ordination will inspire more local youths to pursue religious vocations to serve their people.

He said his superior will assign him to a place to work next month.

Quan Hao Parish with 2,000 members built a new church on 700 square meters in 2020. Priests from Yen Bai Parish offer pastoral care to them.

Yen Bai province has 50,000 Catholics but has produced only seven priests in the past century.