The passing of Father Jerry Martinson on May 31 means the Catholic Church in Asia has lost one of its media giants. His death was not only a news item in Taiwan, where he was a national TV celebrity, but it was also across China where his TV appearances and documentary productions made him a widely recognized personality.

In 1984, Jerry was in his native San Diego visiting his ailing mother and attending to her needs. It was at the time of the Los Angeles Olympics and he went to a shopping mall to buy some items for her. At the same time, members of the Olympic athletics team from the People's Republic of China were visiting the same mall. They rushed him chanting "Uncle Jerry," his TV name in a long running bilingual series he shared with children learning English telecast across China.

But his well-deserved status as a giant of Catholic media and Chinese television — in Taiwan and the People's Republic — masked an understated manner that belied his continuous achievements over 50 years from an unpromising base in Taiwan.

Personally, he knew well that his time would be shorter than many among us and, as he told his friends, he wasn't afraid of dying. His heart and blood pressure issues — his father died when Jerry was 11 years old — eventually had their way. He believed in the resurrection and faced his own demise with confidence. But Jerry also knew well he would not be making old bones.

He felt himself so connected with the local people that in his application for becoming a naturalized citizen of Taiwan, he wrote his surname Martinson as "Ding" in Chinese.  Jerry was supposed to receive his Taiwan identity card from the Ministry of Interior on June 1 as gratitude for his long-standing service.

In the above video Father Jerry Martinson describes the development of programs on some of the great figures in Catholic missionary endeavors in China.

Jerry, who was born in 1942, came to Taiwan in 1967 and was among the last of the Californian Jesuits to come to the China Mission. California was the last Jesuit province to adopt a China mission. Taiwan 'can be the bridge' between Vatican and Beijing 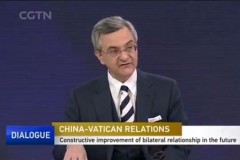 Jesuits from the California Province of the Society of Jesus came to China in the mid 1930s but kept sending their members to work with the Chinese long after their initial missionaries were expelled from China, following the victory of Mao Zedong's Communists in 1949 over the Nationalist Party led by Chiang Kai-shek.

Jerry arrived in China at what could be termed the peak of U.S. missionary expansion in Asia. In the following years, fewer were available to be sent and some that had come returned to the United States. Not Jerry, and this year he completed 50 years working from his base in Taipei.

He and his colleagues at Kuangchi Program Service presided over the development of what began in the 1950s as a shortwave radio service into the first independent TV production company in China. He shared the presidency of KPS in the 1970s and 1980s as it developed top rating programs for Taiwan and started to develop co-productions with partners in Mainland China, especially in Nanjing and Shanghai.

These relationships culminated in a trilogy of programs on some of the great figures in Catholic missionary endeavors in China — Matteo Ricci, Adam Schall von Bell and Giuseppe Castiglione.

But Jerry's missionary activities extended well beyond China. Jerry was blessed with a gracious and engaging personality. His good looks not only worked well on TV but also in the way he was attractive to so many people. And he was no more animated and magnetic than when teaching, which he did in seminars and media training sessions across Asia. In his focused and deeply personal attention to students, seminarians, sisters and diocesan officials developing videos for their programs and web sites, Jerry was the epitome of full attention.

This was only one reflection of his still, silent core at the heart of his being. Nurtured in daily contemplation in the Ignatian tradition, Jerry had a serenity that radiated the calm confidence that anything was possible.

And he needed it. A prophet often not recognized in his own land, Jerry had to contend with the obfuscations of Chinese bureaucrats intent on scuttling his projects and, at times, the incomprehension of Jesuit Superiors without the imagination or courage to travel with Jerry as he sought to do the good he knew he could. Beneath this sunny Californian lurked the steely determination of a man on a mission.

And God who began the good work in him as an 18-year-old who joined the Jesuits in 1960 brought it to completion in the lasting legacy of his abundant productivity. May his creative soul rest in peace.