Remembering the Asian theologian of 'bits and pieces' 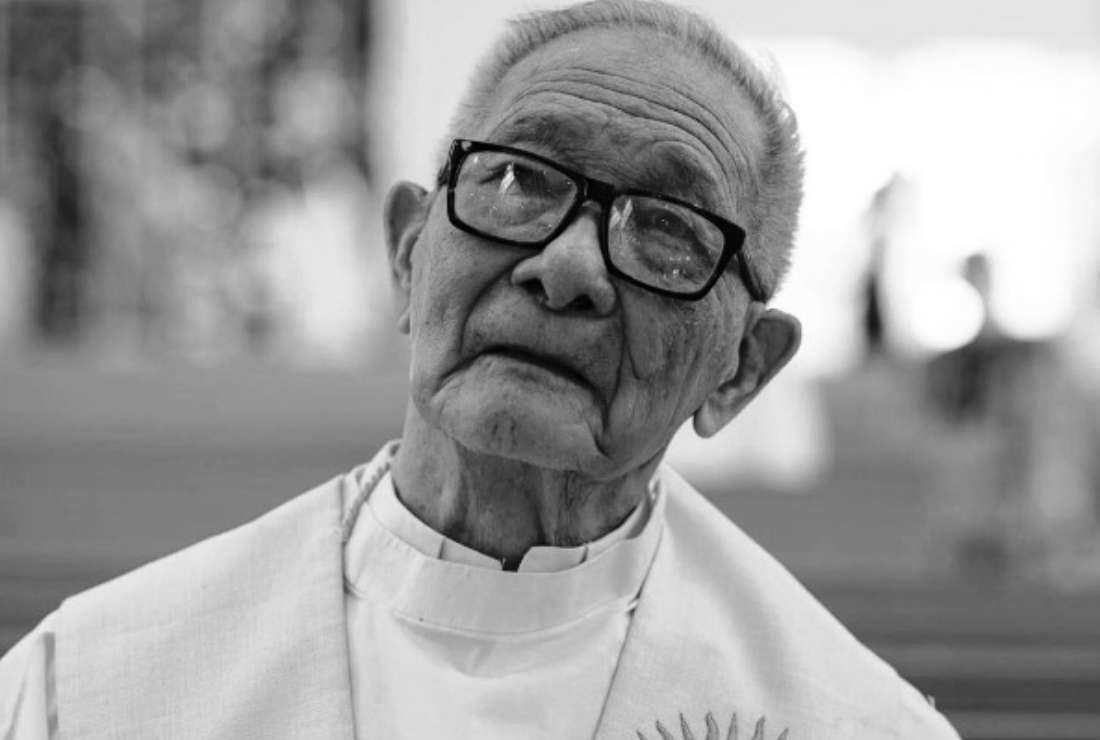 Filipino Jesuit Father Catalino Arevalo, whom many consider as the 'father of Asian theologizing,' died at the age of 97 on Jan. 18. (Photo supplied)

Filipino Jesuit Father Catalino Arevalo, whom many consider the “Father of Asian Theology,” died at the age of 97 on Jan. 18.  His funeral Mass is scheduled for Jan. 22 at Ateneo de Manila University’s Church of the Gesu.

The Jesuit brought his own method into conversation with other theologians in the Philippines, recalls Vincentian Father Daniel Franklin Pilario, a theology professor in the Philippines. In the following tribute, Father Pilario provides excerpts from a 2004 article he wrote on the theology of Father Arevalo:

Theologians need to have a concrete grasp of the country’s main political and economic movements, so as to act on them in the spirit of the Gospel. This intrinsic connection of theology with time and historical circumstance can be discerned in Filipino Jesuit Father Catalino Arevalo’s theological method of “reading the signs of the times,” a term introduced by Vatican II.

Somewhere in his writings, Father Arevalo wrote: Ours is "a theology of bits and pieces gathered and scotch-taped together in hours of doing and suffering, in dialogue and confrontation, in reflection and prayer, in emptiness, in confusion and paralysis — in all the times and seasons of Qoheleth, it would seem — in struggle, sometimes in anguish and despair, sometimes with the shedding of real blood and tears.”

Founded on the authority of magisterial statements, the theology of the signs of the times is “a theology of the discernment of the action of God and the grace of God in history.” It tries to feel the pulse of ‘what is going on’ in history in order to discern ‘what is going forward’ in the aspirations of peoples.… In other words, this methodology challenges the theologian ‘to live as close to the people as possible as to be able to hear their heartbeat’ so that s/he can ‘walk with’ them and help point to their destination in their journey to the Kingdom.

I would like to highlight three positive characteristics of this approach: (a) its ad hoc theologizing; (b) its liberationist concerns; and (c) the centrality it accords the magisterium and its texts.

First, theology as played in the midst of pressing needs and urgency, as it is in any other part of the Third World, can only be done in an ad hoc manner. It is not a theology of theological journals and academic conferences. It is a theology-on-the-spot. Its home is “the heat of the day and the dust of the road, the wayside inns of the evening, with the inevitable partialities of half-formed questions and unfinished discussions: a theology in via, of a people also on its way.”

In a way, theologians in the Third World are not just ‘interested’ in contextual theology; they are forced by circumstance to ‘do it,’ as Arevalo himself attests.

Called to speak in grassroots seminars and workshops, regional or diocesan discernment processes, or among religious communities and laity, theologians from the Two-Thirds world do theology, not with the publication of a magnum opus in mind. They do not wrestle with concepts and hair-splitting distinctions but with “real flesh and blood issues, with concrete policies and decisions which had to be worked out.”

This is exemplified in the life of Arevalo himself who has not only been a teacher of several bishops and hundreds of priests but also drafted numerous church documents and pastoral letters, written speeches, homilies, and statements, of bishops and cardinals, of Jesuit general and provincials, etc. If all these written pages are collected, by his estimate, it will amount to around 8000-9000 typewritten pages. Yet none of these, except for a few articles, are credited under his name.

This humble anonymity under which a theologian labors, but which is also due in part to the many persistent demands with which s/he has to cope (e.g., teaching, meetings, conferences, organizing, administration, etc.), mainly characterizes most of the Third World theologizing. Arevalo describes it as a kind of theology ‘done on our feet’ in order to help the Church (e.g., communities and leaders alike) ‘think her way through’ its ever-changing situations.

The provisional and transitory character of this theologizing shows itself in many titles of Arevalo’s articles which most often bear the title ‘notes,’ ‘prenotes’ or just ‘some thoughts’ on something. Such a life-witness of a theologian exemplifies the notion of theology done at the point of urgency and difficult circumstance.

Second, among Filipino theologians, it was Arevalo who, after having interviewed and exchanged views with Gustavo Gutiérrez, Lucio Gera and Juan Luis Segundo in Latin America in 1970, pioneered the introduction of liberation theology to Philippine audiences (just at a time when the movement itself was beginning to make itself heard in the international theological community).

Even before the term ‘preferential option for the poor’ gained worldwide currency, Arevalo already speaks of the Church ‘siding’ with the oppressed as he also takes issue with “attitudes of selfishness and structures of institutionalized egoisms” found in “politics and trade systems that exploit the poor”.

From the very start, however, Arevalo already distanced himself from the uncritical appropriation of Marxist categories by Latin American theologians, thus, describing himself as never having been a total ‘convert’ of liberation theology.

This critical relationship with both the political status quo and Marxist-Maoist thought characterizes mainstream theologizing in the Philippines. It relies not so much on these ideologies as on Church’s teachings.

Texts of the Magisterium

This leads us to the third feature of this method; its very close and integral link with the magisterium and its texts. Theology, in this context, founds itself on, and consciously makes, the magisterium of the Council, the popes, and the episcopal conferences as ‘source texts,’ thus, making palpable within theological reflection the spirit of catholicity and tradition. “Filipino theological reflection,” comments Arevalo, “has considered this a strength, not a weakness; a source of greater assurance in discernment and decision.”

Furthermore, Arevalo considers the pastoral statements of local bishops and the documents from national and regional conferences to be ‘theologies’ in themselves. Thus, when he speaks of the theology of “bits and pieces,” he has in mind these documents and pastoral letters that the regional (FABC) and local magisterium (CBCP) have issued, and which he himself has also helped to produce. Though these documents are “a far cry from the magnificent summae of the Middle Ages… [they] are yet the substantive Filipino theological texts of our generation.”

In the careful and creative crafting of these statements is located the service of the theologian in the Church. It is precisely these documents, which ultimately show what inculturation of the Church and theology ultimately means, that is, as “a task of the local church in the process of its self-realization in history.”

Rest in peace, faithful servant of God and the Church.

*Father Daniel Franklin Pilario, a member of the Congregation of Mission, is a professor of St. Vincent School of Theology of Adamson University. He is also visiting professor at several other theology seminaries and a founding member and former president of the Catholic Theological Society of the Philippines. The views expressed in this article are those of the author and do not necessarily reflect the official editorial position of UCA News.