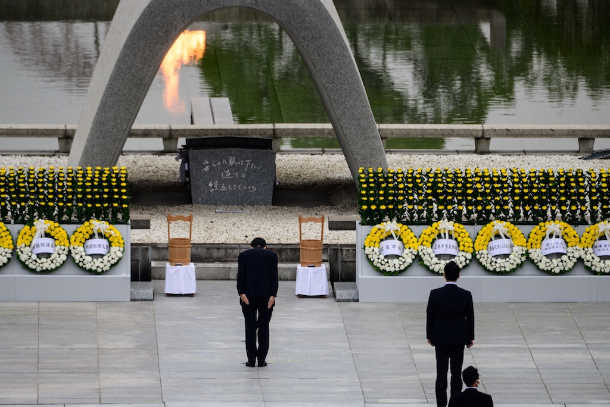 Japanese Prime Minister Shinzo Abe bows in front of the Memorial Cenotaph after delivering a speech during the 75th anniversary memorial service for atomic bomb victims at the Peace Park in Hiroshima on Aug. 6. (Photo: AFP)

As the world struggles to contain the Covid-19 pandemic, Hiroshima today held a scaled-back memorial service on the 75th anniversary of the world’s first atomic bombing.

"On August 6, 1945, a single atomic bomb destroyed our city. Rumor at the time had it that 'nothing will grow here for 75 years,'" Matsui said. "And yet Hiroshima recovered, becoming a symbol of peace."

In a video message, UN secretary general Antonio Guterres called on all nations to renew steps to abolish nuclear weapons as "the only way to totally eliminate nuclear risk."