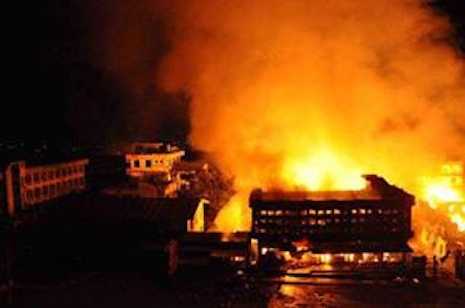 Flames engulf a building in Lashio in Myanmar's Shan state

A mosque, a Muslim school and shops were burned to the ground in the northeastern city of Lashio yestyerday in the latest incident of sectarian violence to hit Myanmar.

Unlike previous rioting between majority Buddhists and Muslims in the past year, no-one was killed in Lashio, according to police.

But a woman remained injured in hospital after she was doused in petrol and set on fire by a man during a dispute late yesterday afternoon which sparked the rioting.

After police detained the man, thought to be a Muslim, an angry Buddhist crowd surrounded the police station and demanded he be handed over, said Lashio resident Ko Teik.

When police refused, the mob went on a rampage, attacking a mosque near Lashio market, he added.

“Muslims had to leave their houses and properties and take refuge at relatives’ houses last night,” he said. “Even at midnight, flames could still be seen in the sky.”

Authorities responded with an emergency decree, initiating a curfew between 7pm and 5am and forbidding public gatherings and speeches.

Lashio’s main market was closed today in a bid to prevent further violence as residents said the city remained calm but in a state of fear.

“Damaging religious buildings and creating religious riots is inappropriate for the democratic society that we want to create,” presidential spokesman Ye Htut said on his Facebook page in response to events in Lashio.

Yesterday’s violence follows similar rioting in the central city of Meiktila and Okkan township north of the country’s largest city Yangon in the past two months.

In June and October last year, at least 192 people were killed and about 140,000 displaced following rioting between Buddhists and minority Muslim Rohingyas in western Rakhine State.