When China's Minister of Housing Chen Zhenggao traveled to bustling Yiwu in Zhejiang province in mid-October, his speech will have sent a chill through all of China's Christians, by some estimates as many as 100 million people.

"Battle against illegal constructions" by learning from Zhejiang, Chen urged, according to the Zhejiang Daily.

His words were not lost on the 150 housing and law enforcement officials present: Zhejiang has used the pretext of illegal building to bulldoze churches and remove their crosses. By Christmas 2014, reports said 500 churches had been targeted in the province. By this Christmas, the number had exploded to over 1,500.

In Tibetan monasteries, monks and nuns have complained in recent months the Communist Party is interfering more in daily life than it has for years. In restive Xinjiang, burqas were banned; so too was "terrorist clothing."

After claiming 2014 to be the worst year for religious persecution in China since the Cultural Revolution, observers in and outside the country say this year saw the situation deteriorate still further. Relations between China's faithful and the Communist Party have not been this strained since the days of Chairman Mao.

"Authorities have lost the hearts of the people after the cross-removal campaign," said a former Catholic journalist in Zhejiang who gave only her Christian name, Clare.

Although authorities succeeded in forcing churches to carry less conspicuous crosses in Zhejiang, few doubt the provincial government's campaign has achieved anything except harden Christian resolve, let alone curb an appetite for evangelism.

"It helped unite all the clergy to fight for their rights," said John, a catechist in Wenzhou.

As the cross-removal campaign reached a crescendo midyear, ordinary Christians and priests took to social media to announce a campaign making minicrosses, and bishops took the rare step of publicly denouncing authorities.

With the campaign winding down in Zhejiang, Christians say they now face something even worse: the cross-removal campaign was all about controlling the church facades, but in recent weeks authorities have interfered inside churches. 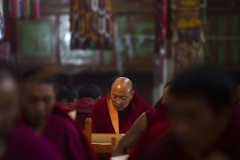 Catholics kneel and pray outside a Jingjiang church as they witness the removal of their cross. (ucanews.com file photo)

In Wenzhou, Christians have reported state officials attending church on Sundays to silence critical voices. In other areas of Zhejiang, authorities have put up propaganda notices on church pin-boards, according to state media. This is all part of a new campaign called "five entries and transformations" that aims to make churches more Chinese — and by default less foreign — while picking and choosing Bible verses that correlate to party doctrine.

In short, the Chinese Communist Party is attempting to co-opt Christianity to its own political ends. But it remains unclear whether its policy comes from the very center of the party, and therefore whether it will endure, said Fenggang Yang, director of the Center of Religion and Chinese Society at Purdue University.

High-ranking party officials appear to disagree about whether Christianity should adapt to China, or the other way round, he added, and a firm direction won't be decided until a delayed religious meeting led by President Xi Jinping takes place.

"The multiple postponing of this meeting is a sign of Xi's dissatisfaction with the work and direction of religious affairs, and probably a sign of an impasse of internal debates and disagreements," Fenggang told ucanews.com.

Previously slated to take place at the end of 2015, the critical meeting will almost certainly be delayed until the New Year. For China's diverse religious communities, the future remains less certain than it has been for many years.

This year started with an official ban on burqas in Xinjiang, then in May Beijing extended what is in effect a state of emergency following a series of bloody attacks.

Stricter measures have seen the first mass trials in China in 20 years and thousands of additional troops deployed in cities including Urumqi.

Alarmed by a series of bloody attacks blamed on Uighurs and recent violence overseas by the group calling itself Islamic State — IS released its first call to arms in Mandarin in December — Beijing has pushed ahead with drafting a new, controversial anti-terror law.

International rights groups acknowledged China needs to tackle a surge in violence in the west of the country, but also warned repeatedly that the draft risks enshrining a vague catch-all to help Beijing target opponents — real and imagined.

In January, authorities in Tibet posted public notices offering rewards of up to 300,000 yuan (US$48,000) to informants who tip off police ahead of "violent terror attacks."

The main targets were vaguely described as "overseas terrorist organizations and their members' activities inside China and those spreading religious extremism."

In July, police in a Tibetan region of Sichuan province opened fire on protesters demanding the return of the body of spiritual leader Tenzin Delek Rinpoche who died after nearly 13 years in prison. His conviction and 20-year sentence for a series of bombings in Chengdu in 2002 remains disputed by most Tibetans.

Although his represents the most high-profile case this year, overall more Tibetan monks and nuns were confirmed detained — 31 in 2015 compared to 21 the previous year, according to a tally by London-based Free Tibet.

"We have seen more solo protests by monks — which inevitably lead to arrest — but also a number of arrests which seem intended to prevent protest," said Free Tibet Campaigns Manager Alastair Currie.

In one recent case, a video showed five policemen wrestling a 25-year-old man to the ground after tossing prayer papers into the air and calling for the Dalai Lama to live a long life at a market in Kardze in late November. His whereabouts remains unknown.

As Tibet's spiritual leader turned 80 in July, Beijing seemed to turn up criticism denouncing his "Middle Way" approach of greater Tibetan autonomy in an official policy paper in April that dismissed hope of future talks.

"[This] clearly shows that China has hardened its position on Tibet," said Sonam Dagpo, a spokesman for the exiled government who has served as a negotiator with Beijing.

Then suddenly, two weeks after the Dalai Lama's 80th birthday, a Tibetan delegation returned from Beijing saying more dialogue would soon follow. It had been five years since the previous official talks.

China remains reluctant to discuss further autonomy with the Tibetan exiled government. But as Beijing seeks cooperation from the Dalai Lama in working out his messy reincarnation, it appears more willing to talk than at any other point this decade.