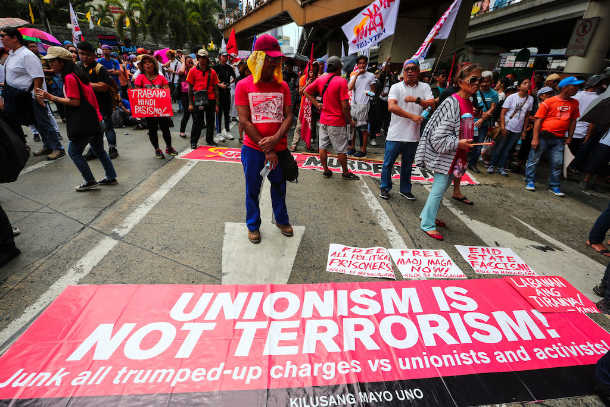 Philippine activists hold a demonstration in Manila to condemn the tagging of several religious, human rights and labor groups as communist fronts. (Photo by Jire Carreon)

A group of nuns and priests have asked the Philippines' highest court for legal protection against threats to their lives after they were tagged as having links to terror groups by the military.

The Rural Missionaries of the Philippines (RMP) joined other human rights organizations in filing a petition on May 6 for writs of amparo and habeas data before the Supreme Court.

The writ of amparo (protection) was instituted by the Supreme Court in 2007 as a legal remedy to any person who felt that his life, liberty and security were threatened by an unlawful act or omission of a government official.

The writ of habeas data (access to information) was introduced by the Supreme Court in 2008 to give individuals the right to find out what information is being kept about them by the government, and to demand its updating, rectification or destruction.

The RMP, an organization of priests, nuns and lay people, claimed that one of its members was a victim of extrajudicial killing while others have been detained.

Australian missionary nun Patricia Fox, a member of the RMP who drew the ire of President Rodrigo Duterte for joining protest rallies, was forced to leave the country after failing to get her visa extended.

The missionary organization has been identified as a "terrorist front" in flyers handed out by suspected military personnel in the southern Philippines.

"This is a response to the worsening attacks, terrorist tagging by the military and the ongoing smear campaign against human rights defenders," said Elisa Lubi, chairwoman of rights group Karapatan.

"Human rights advocacy is not a crime, yet human rights workers are being killed, threatened, harassed and jailed on trumped-up charges."

The groups named Duterte, officials of the presidential palace and security officials as respondents to the petition.

They submitted to the Supreme Court six public speeches by Duterte where he tagged the organizations as "communist fronts."

Lubi said 48 human rights workers have been killed by government forces from 2001 to 2019 while several rights leaders and members have received death threats.

"Petitioners who are legitimate organizations recognized both here and abroad, including their officers and members, have become open targets of human rights violations," read the groups' petition.

It said the "glaringly numerous incidents of threats, harassment and killings" are aimed at curtailing their rights to freely exercise their advocacies.

"The red tagging ... further aggravated the threats against the life, liberty and security of the petitioners," it added.

Aside from the writs, petitioners also asked the court for a temporary protection order for their members.

The groups appealed to the Supreme Court to see "the merit of our petition, the dangers of our work, and eventually decide in favor of human rights defenders."

On May 3, the Supreme Court granted a similar petition by the National Union of People's Lawyers and ordered the Court of Appeals to hear on May 14 the group’s petition for a protection order.