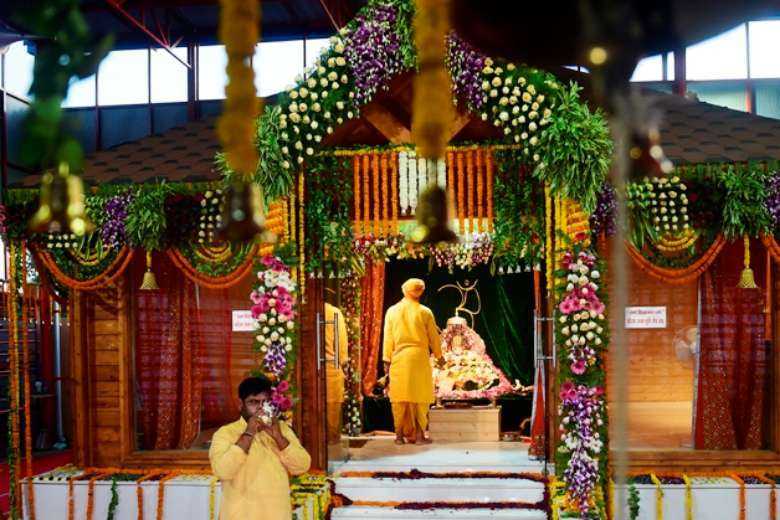 Hindu priests perform evening prayers inside a temporary temple near the proposed Ram temple being constructed at a flashpoint religious site in Ayodhya, Uttar Pradesh, that has sparked some of India's worst sectarian violence. (Photo: AFP)

For Indian politicians, it is time again for temple runs as five crucial states, including the largest, Uttar Pradesh in the north, prepare to go to the polls in the first quarter of 2022.

And besides making a public display of offering flowers and milk to a plethora of gods, the usual election talk to polarize the electorate into majority Hindus and minority Muslims will carry on full steam in the coming months.

The Taliban takeover of Afghanistan in August is proving handy for the ruling Bharatiya Janata Party (BJP) and the pro-Hindu outfits aligned with it while warning voters to resist any attempts to Talibanize India.

Such rhetoric and the resulting public mood suit Prime Minister Narendra Modi’s BJP, which has high stakes in these provincial elections. It rules all but one of the five states.

The northern state of Punjab is the only state ruled by Congress, the main opposition party. The repeal of three farm laws in November in the face of sustained agitation by Punjab’s farmers was an unusual retreat by the Modi regime known for its macho-Hindu politics.

The BJP could also face some tough challenges in retaining power in Uttar Pradesh, as it may in Uttarakhand in the north, Goa in the west and Manipur in the northeast, where it rules in alliance with regional parties.

The rhetoric about Akhand Bharat is not unexpected. It keeps voters engaged in past issues that benefit the Hindu right

The election talk in recent weeks has veered toward the old enemy Pakistan. Federal and provincial ministers of the BJP have been emphasizing the need to fight Muslim-majority Pakistan in a more aggressive manner and wrest back areas held by it.

There’s also talk of reclaiming the mosques in the ancient towns of Varanasi and Mathura by claiming they were built on Hindu temple sites, the same way the demolished Babri Masjid was in Ayodhya.

To top it all, no less than Mohan Bhagwat, the chief of Rashtriya Swayamsevak Sangh (RSS), the parent organization of Hindu nationalists, spoke about reviving Akhand Bharat or undivided India from the mythical past.

A geographically larger India that posits a number of modern-day South Asian nations like Pakistan, Afghanistan, Bangladesh, Nepal, Bhutan, Tibet, Sri Lanka and Myanmar as one nation may appear wishful thinking, but it does serve the purpose of uniting the majority Hindu electorate in modern India.

“The rhetoric about Akhand Bharat is not unexpected. It keeps voters engaged in past issues that benefit the Hindu right. The repeated references to the partition of India in 1947 keeps the anti-Muslim mood on a high decibel politically,” says Tushar Bhadra, a resident of Varanasi, Modi's parliamentary constituency in Uttar Pradesh.

Not everybody within the BJP is comfortable with the rhetoric. “We should not sound foolish internationally by talking about changing the geography,” says a BJP lawmaker on condition of anonymity.

“Strategically and diplomatically, India needs to present a modern face. Its emerging economic strength is in the present Indian geographic boundary.”

There are parallel efforts at indoctrination to keep voters intoxicated on Hindutva ideology which seeks to establish the hegemony of Hindus and Hinduism in India.

A panel of Indian parliamentarians headed by BJP MP Vinay Sahasrabuddhe wants India to “incorporate the ancient wisdom, knowledge and teachings about life and society from Vedas and other great Indian texts/books in the school curriculum.”

Hindutva has paid rich dividends to the BJP so far. Its government in Uttar Pradesh is headed by Yogi Adityanath, a radical Hindu monk known for his anti-Muslim rhetoric. He’s also been a votary of “reconverting” Muslims and Christians back to the Hindu fold.

The Yogi administration is being charged by rights activists with targeting minority communities, especially Muslims, under the false pretext of protecting Hindu women from Muslim stalkers and eve-teasers, not to mention “love jihad.”

The ruling party’s internal survey suggests the going could now be tough in India’s largest province, which also elects 80 parliamentarians including Modi.

The prime minister, a native of Gujarat in the west, shifted to the sacred Hindu city of Varanasi to enhance his pro-Hindutva image. The gamble paid off with the BJP performing well during the 2014 and 2019 parliamentary polls, as it did in the last state elections held in Uttar Pradesh in 2017.

This time, though, the BJP may face a tough contest from the Samajwadi Party, a socialist party popular among Muslims, the Bahujan Samaj Party, which champions the cause of Dalits, and the Congress, which has lost political steam in Uttar Pradesh over the years.

Modi's lieutenant and federal home minister, Amit Shah, is known to quip: "The road to power in Delhi goes through Uttar Pradesh."

BJP leaders often say the Ram temple being constructed in Ayodhya in Uttar Pradesh on land where once existed the Babri mosque is “a matter of faith” and not electoral politics.

But then, as political analyst Vidyarthi Kumar says: “Faith is a powerful political engine to run the electoral machine and the BJP is good at it.”

The issue of Mathura, “where Hindutva groups say a Muslim Idgah was built on the spot where popular Hindu God Krishna was born,” can be potent ahead of elections, he feels.

One thing is sure. Polarization will continue to rule the roost in Indian politics during the coming months and may continue to do so as state elections are due in Gujarat and Himachal Pradesh by the end of 2022.

These will be followed by another round of provincial polls in 2023 in Madhya Pradesh in central India and Rajasthan in the west, besides the Christian-majority Nagaland and Meghalaya in the northeast, before Modi’s BJP takes yet another shot at retaining power in Delhi in 2024.