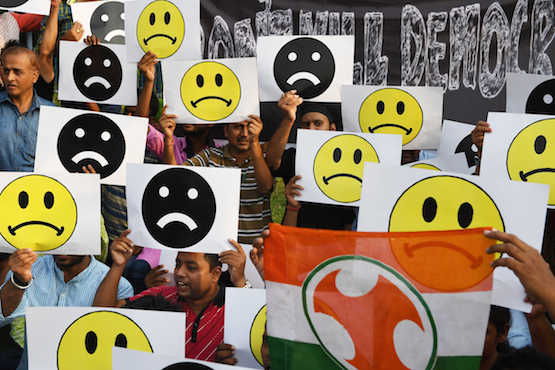 Indian National Congress party activists hold placards and shout slogans against the ruling Bhartiya Janata Party (BJP) and Prime Minister Narendra Modi during a protest in Kolkata on May 17. (Photo by Dibyangshu Sarkar/AFP)

In the campaign for the southern Indian state of Karnataka's May 12 election, religion was once more at the center of the battle between the Hindu-nationalist Bharatiya Janata Party (BJP), which controls the federal government, and its long-term rival, the Indian National Congress.

The two, along with local secular party Janata Dal (Secular) were fighting for the votes of a substantial Muslim minority of about 13 percent in a poll that underscores the religious versus secular battle lines that have now been drawn in the world's largest democracy.

The poll was more than just a test to determine which side had a superior on-the-ground organization. Rather, it was a test of how well the Hindu nationalist card, melded with promises of economic improvements, would fare in the heartland of India's information technology sector.

Moreover, it's clear the BJP is winning that battle. It had the chance of forming a government while gaining just 36.5 percent percent of the vote but ultimately a Congress-JDS coalition prevailed.

Yet this fight for democratic tolerance will be largely ignored by India's allies due in part to the emerging battle to contain communist China.

After four years under the leadership of Prime Minister Narendra Modi, himself a member of the BJP, the intensity and frequency of violence meted out against religious minorities has been escalating.

There has been a disturbing increase in cases of lynching. Some are carried out in the name of protecting cows, which are considered a sacred animal in Hinduism.

Such episodes have claimed at least 25 lives since 2010, with 21 of the victims being Muslims, according to a recent report by the IndiaSpend website.

They are the chief target of these violent attacks, oppressive laws and a general atmosphere of repression despite numbering 170 million, which makes India the country with the third-biggest Muslim population in the world after Indonesia and Pakistan.

There has also been a notable increase in the number of violent attacks against Christians, particularly those who are part of ethnic minority groups and who live in remote areas. Earlier this year, nuns who were working at a hospital in the country were set upon.

India officially has 28 million Christians, 20 million of whom are Catholics. The remainder is made up of various Protestant denominations.

They are concentrated mainly in the southern part of India, with 13 million living in the five states of Kerala, Tamil Nadu, Karnataka, Andhra Pradesh and Telangana.

Another 7 million live in the seven northeastern states where British Colonial American Baptist missionaries successfully worked to spread the faith in the 19th century.

The other 8 million are spread across the rest of vast northern India, where they make up less than 1 percent of the population.

The dark force behind the BJP, which swept to power in 2014, is its nationalist policy of Hindutva ("Hinduness"), which it officially adopted in 1989. This is heavily promoted by "volunteer" organizations including Rashtriya Swayamsevak Sangh (RSS).

Put simply, this focuses on India as a Hindu nation, including other Indian religions such as Jainism and Sikhism, but excluding Christianity and Islam.

Sadly, India is not alone in seeing a rise of religious nationalism, which is becoming the new normal in South Asia and Southeast Asia.

Examples are numerous. There is the decades-old battle between Hindus and Tamils in Sri Lanka, rising Islamic fundamentalism in Pakistan, and more religious battles being waged in Bangladesh, Malaysia, Indonesia and the southern Philippines.

Meanwhile, hard-line Buddhism has shown a particularly ugly face in Myanmar, where it has been complicit in the persecution of Rohingya Muslims, and is also bubbling away in Thailand.

Moreover, authoritarian regimes in Vietnam and Laos continue to persecute Christians, particularly those who belong to ethnic minority groups.

Yet it's a shame to see that any diminution of social justice in the U.S. and its democratic Asia-Pacific allies Japan, South Korea and Australia as they wish to be on "friendly" terms with either militarily or strategically so issues tend to go uncommented on.

This way of doing business has become ingrained in those governments, which brings to mind the truism that the only thing necessary for evil to triumph is for good men (or countries) to do nothing.

However, India has been getting something of a free pass lately despite its growing track record of religious persecution for reasons of political expediency.

This is because it is part of the so-called Quadrilateral Security Alliance, or "Quad," which binds it together with the U.S., Japan and Australia as they battle for more influence in the Asia-Pacific region against China.

India's relations with China have now reached a 50-year low, reminding some of those heady days when the situation escalated out of control in 1962 and they had a brief border war (India lost).

China periodically tests India with provocative actions on their shared border that runs along the remote and mountainous Indian state of Arunachal Pradesh. Ironically, this is a predominantly Christian area where Modi's pro-Hindu supporters regularly persecute local ethnic minorities.

Another part of the border runs along the similarly remote (and disputed) Aksai region, from where Indians can look across at the heavily Muslim Chinese province of Xinjiang.

Under Modi, India's appalling treatment of ethnic minorities and minority religions is starting to resemble that of its bitter enemy, Communist China, which has recently begun a systematic program of persecution against Christians and Muslims alike.

But there is some upside in that India remains a vibrant democracy.

The BJP has been bested and tested in recent elections, especially in the state of Karnatka where it was expected to win but was ultimately beaten by a coalition.

Even though a free, competitive and combative press is lacking in so many parts of Southeast Asia, there is no good reason why India should continue to receive a free pass from countries that should and do know better.