Indian bishops say authentic nationalism respects the human dignity of all citizens, not the exclusion of some 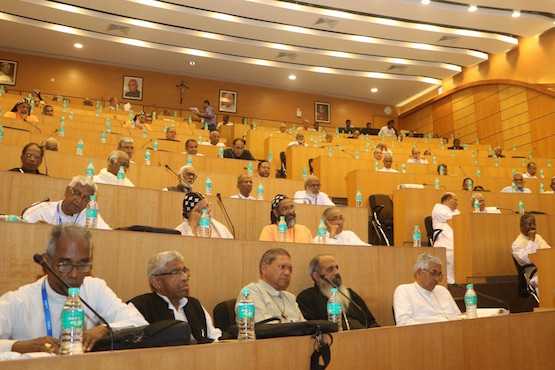 Indian bishops attending a session of their Feb. 2-9 biennial plenary in the southern Indian city of Bangalore. Their final statement warned that promoting nationalism based on religion would lead India on a path of self-destruction. (Photo by Anto Akkara)

Promotion of nationalism based on religion threatened India with annihilation, the nation's Catholic bishops warned at the conclusion of a biennial meeting.

The alarm was sounded following a series of hard-line Hindu attacks on Christian and other religious minorities.

This included attempts by mobs of young Hindus to conduct avowedly patriotic rituals in the grounds of Catholic colleges, notably involving the personification of 'Mother India.'

It was dangerous to promote nationalism based on any particular culture or religion, the Feb. 2-9 gathering of some 200 bishops from 174 dioceses warned.

"Such misconceived efforts can only lead our nation on the path of self-annihilation," they said.

The bishops met in the southern city of Bangalore for discussions under the theme 'United in diversity for a mission of mercy and witness.'

They agreed that enhancing of India's rich cultural and religious diversity was needed to achieve peace and progress.

In 2017, India witnessed 736 incidents of violence against Christians, according to a report of the ecumenical forum 'Persecution Relief.'

Some hard-line Hindu groups portray Christians and Muslims as being loyal to foreign powers.

A number of Hindu leaders have publicly called for Muslims to leave India and settle in majority-Islamic nations and for Catholics to move to Rome.

However, the Indian bishops gathered in Bangalore noted that Christian faith in India is as old as Christianity itself.

Their statement was signed by outgoing conference president Cardinal Baselios Cleemis of the Syro-Malankara Church. This is an Eastern Catholic Church tracing its origins to St. Thomas the apostle, who according to tradition preached on the west Indian coast in AD 52.

The latest biennial meeting of bishops stressed that India remains in need of services provided by Christians such as education, health care and social welfare.

Christians continued to "love India" and build peace, truth, justice and freedom while reaching out to Jesus.

Violence rebounded on the practitioners of violence sooner or later, said the bishops.

They deplored the victimization of women and communal violence, not least attacks on Christians.

The bishops maintained that authentic nationalism respected the human dignity of all citizens, regardless of their economic status, culture, religion, region or language.

And they undertook to continue to help uplift the poorest elements of society, such as many Dalits, formerly known as untouchables, and deprived ethnic minorities.

The bishops further pledged collaboration with government officials to maintain law and order, secure economic development and protect the environment.

"Even as we face many grave challenges and setbacks to the unity in diversity of our country, we are proud to be Indian," the assembled bishops stated.