The popular Shwedagon Pagoda in Yangon, which the Sangha (the Buddhist clergy) has agreed to close to prevent the spread of the Covid-19 pandemic. (Photo: needpix.com)

All sections of society in Myanmar, including religious organizations, have joined the government's efforts to face the Covid-19 threat. We see Buddhist monasteries distributing food to impoverished people, Muslim mosques receiving migrant workers in quarantine, and Catholic nuns in Yangon involved in providing the health care of the poor.

As of May 16, Myanmar had recorded 180 confirmed cases of Covid-19 and six deaths. These official figures are incomplete given the low testing capacity. According to the World Bank, as of March the country had only 250 respiratory ventilators. Besides, testing is only available in Yangon and fewer than 10,000 tests have been performed since the beginning of the pandemic. Authorities have plans for more testing in Mandalay.

The Myanmar government has limited resources to support its economy, which has already been severely affected by the pandemic. More than 90,000 jobs have already been lost since the beginning of the crisis, with the manufacturing and tourism sectors being the hardest hit.

Volunteer groups and numerous humanitarian organizations are supporting the government in mobilizing and distributing aid material and running awareness and prevention campaigns, even in villages.One month after State Counselor Aung San Suu Kyi launched an emergency fund for Covid-19, donations have been pouring in — 891 million kyats (US$635,000) has been sent by institutions, companies and individuals. Suu Kyi appreciated this gesture during a video conference with coronavirus patients. "I dare to say that no other country in the world will have received such popular support," she said. (Myanmar is considered the second most generous country in the world after the US, according to CAF's World Giving Index 2019.)

However, almost all armed ethnic groups active in border areas have already declared that they are taking steps to distance themselves from the government. On April 28, a committee was set up to coordinate the efforts of the armed groups and the government. Most rebel groups have no choice but to send their patients to government hospitals, except the Wa, Kachin and Karen groups that have their health services. Cooperation between these warring groups and government is crucial to avoid an unforeseen spread of the virus from porous border areas and protect the country's remote areas.Religious leaders in the Buddhist-majority country are also mobilizing help. The Sangha (the Buddhist clergy) has made a firm gesture by agreeing to close the Shwedagon Pagoda in Yangon. Most monasteries have been closed. Dhama Duta College, the meditation centre of monk Ashin Sakeinda in Yangon, was transformed into a temporary quarantine center for up to 400 people. In the densely populated slums of Yangon, monasteries have been used as quarantine centers for migrant workers returning from Thailand and Malaysia. In early April, a delegation of Buddhist monks, led by Venerable Bhaddanta Kumara Bhivanmsa, recited prayers in Pali on a special flight to protect the country.Finally, the Thingyan Buddhist festival, marking the New Year, had to be canceled. "It's the first time it's happened," according to a 60-year-old woman in Yangon. This cancellation of the popular festivities, organized around concerts and water jets, was decided by President U Win Myint. It was a difficult decision, but it certainly prevented the spread of the virus that would have been caused by the movement of crowds. "I am deeply sorry that our people cannot celebrate Thingyan [Buddhist New Year] because of the Covid-19 epidemic. I call on all to fight the spread of this epidemic in a concerted and united manner, as a historic task," said U Win Myint.

Some tension is palpable in urban centers related to Western or Chinese foreigners, but there has been no inter-religious violence. Some tensions may have arisen following the contamination of more than 50 individuals after a rally organized by a famous and controversial evangelical pastor. 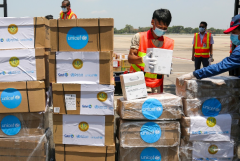 Pastor David Lah, before testing positive for the Covid-19, had organized a religious gathering in the Christian suburb of Yangon, where he declared that the virus would not infect true Christians. However, Christian leaders did not support the pastor and called for unity to fight the virus.

In the wake of the pastor's statement, Myanmar Council of Churches, an ecumenical forum of Protestant Churches, issued a statement stressing unity. "We call on you to fight Covid-19 in unity and love as the coronavirus pandemic threatens the peoples of the world beyond races, religions and castes," members of the council said.

Christian leaders closed churches and called on their people to follow the government's instructions. Father Cyrille Delort, a member of Paris Foreign Mission Society, working in the Sagaing region, illustrated this adaptation of religious life in a video posted on YouTube. Cardinal Charles Maung Bo of Yangon said that church buildings could be used as temporary quarantine centers.

Muslim leaders also called on their communities to stop visiting mosques. The secretary-general of the Islamic Religious Affairs Council and the Union of Muslim Religious Organizations of Burma, Al-Haj Tin Maung Than, said Muslims were prepared to give all mosques and religious schools to be used as temporary quarantine centers. He has also asked Muslim hoteliers to convert their hotel rooms into temporary clinics, if necessary.

Aung San Suu Kyi justified the decision not to apply strict confinement. She said it is needed to protect the poor, who are mainly dependent on the informal economy and daily labor. For their part, religious leaders did not choose to designate a scapegoat and gave their full support.

Religious organizations are fully in line with government efforts to fight the pandemic. The unity of religious institutions in Myanmar in the face of the pandemic contrasts with Burmese nationalism and the current violence between the army and Muslim communities in Arakan State (Rakhine).

A monk from Pyin Oo Lwin, Bhante Bhikkhu Subhut, humorously discussed the topicality of confinement within his monastery: "Recently they built a door with a padlock [at the exit of the monastery], but I have never seen it because I rarely leave the monastery anyway. Since November 2019, I have only been outside twice, for a total of four hours! Confinement does not really change my life."

"The epidemic reveals many things that we read in ancient Buddhist texts … Not only about widespread diseases like in the Ratana Sutta, but unfortunately also about famine. I hope it won't come to that," he says, referring to fears about the difficulties faced by farmers whose crops have seen their prices plummet as a result of the closure of the Indian, Thai and Chinese borders. The monk concludes philosophically: "However, we know that there is a sense of urgency and that age, illness and death are still over our heads. Nevertheless, it is our full-time job to meditate in this way."

The unity of these civil and religious forces in the face of the epidemic is not perfect, however. The Myanmar army on May 9 announced a ceasefire to help fight the pandemic but exempted Rakhine and Chin states, where conflict continues to escalate. It has refused a call for a nationwide ceasefire made by 18 diplomats, the secretary-general of the United Nations, Cardinal Bo and civil society organizations.

As the army continues its offensives in Rakhine, two journalists have been imprisoned for interviewing members of the Arakan Army, recently declared a "terrorist organization." According to the Athan Association, the number of lawsuits brought against individuals who have criticized the state has increased since the National League for Democracy government came to power. Since 2016, at least 67 journalists and 326 activists have been prosecuted for expressing views critical of the state. The army itself has initiated 52 of these trials.