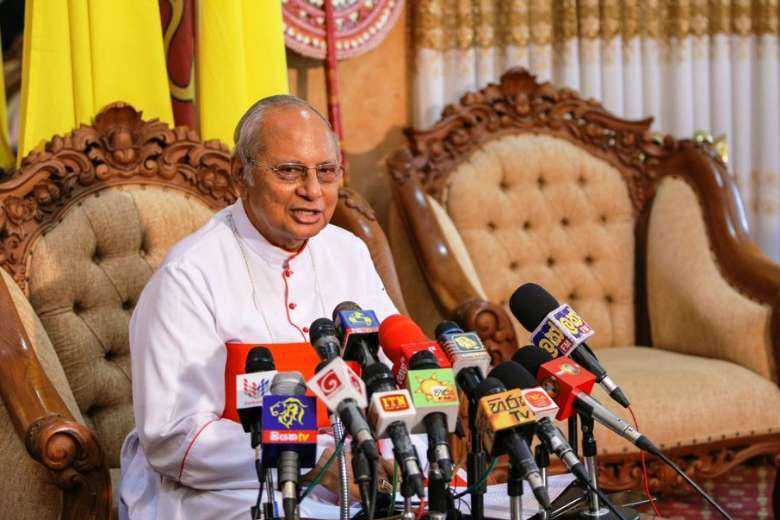 Cardinal Malcolm Ranjith speaks during a press conference at the Archbishop's House in Colombo, Sri Lanka, on May 6, 2019. (Photo: AFP)

Cardinal Malcolm Ranjith of Colombo has teamed up with Buddhist monk Ven. Elle Gunawansa Thera to legally challenge the recent handing over of a 40 percent share in a Sri Lankan power plant to an American company.

They filed a fundamental rights petition in the Supreme Court against the transfer of shares of the Yugadanavi Power Plant to the US-headquartered New Fortress Energy.

The petitioners have demanded the deal be scrapped, claiming that their fundamental rights, as well as the rights of the entire citizenry and their future generations guaranteed under the country’s constitution, have been infringed by the actions of those involved in the Yugadanavi deal.

The agreement signed on Sept. 21 virtually handed over a monopoly to a US company, which was arbitrary and contrary to the law, the petitioners claimed. The petition mentions 54 persons as respondents, including Prime Minister Mahinda Rajapaksa, several cabinet ministers and ministerial secretaries.

Ven. Gunawansa Thera said the cabinet had failed to focus on issues such as the national economy and security before making the decision and raised serious concerns regarding the transparency of the process and the tender system.

“Acting in this manner is a violation of the fundamental rights of the people of the country. That is why Cardinal Ranjith and I filed a case in the Supreme Court,” the monk said, adding that the court is now their only hope.

The Yugadanavi oil-fired power station is the only power plant in Sri Lanka capable of running on diesel or liquefied natural gas (LNG), with the latter less polluting and more cost-effective than other options.

The Sri Lankan government’s approval of the agreement has led to a huge controversy with opposition parliamentarians accusing it of putting the country's energy sovereignty at risk.

The petitioners have pointed out to the court that the transfer of state-owned shares to a foreign company is a reckless act that will have a negative effect on the power sector and is detrimental to the unity of the country.

The court application seeks an order to prevent New Fortress from obtaining the LNG supply contract.

Tissa Attanayaka, an opposition parliamentarian, alleged that the agreement was signed at midnight to keep citizens in the dark. “Parliamentarians and other relevant stakeholders should be made aware of the content of the agreement,” he demanded.