Catholics, Muslims and Hindus are against allowing terminally people to prescribe the withdrawal of medical support 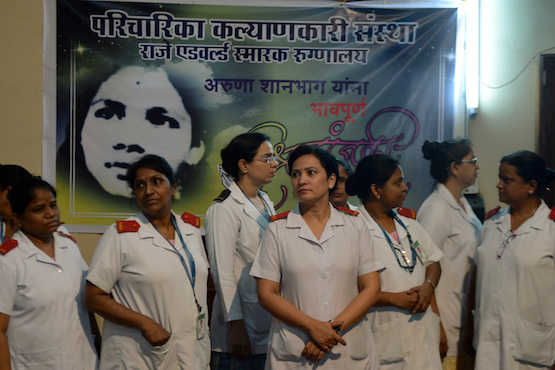 Indian nurses gather to pay their respects to nurse Aruna Shanbaug at a hospital in Mumbai in May 2015. Shanbaug died after 42 years in a coma following a brutal rape in a case that led India to ease some restrictions on euthanasia. (Photo by Punit Paranjpe/AFP)

India's top court has ignited a new religious debate after permitting passive euthanasia, allowing patients to prescribe in their "living will" the withdrawal of medical support if they slip into an irreversible coma.

Leaders of India's Catholics, Muslims and Hindus have opposed the March 9 Supreme Court verdict, which said the right to life also includes the right to die with dignity.

Permission is solely for a terminally ill person to choose death over life support but does not allow doctors or families to take that decision on behalf of the patient, the court said.

India's Muslim Personal Law Board, which deals with the application of Islamic law in personal affairs, also objected to the Supreme Court judgment.

Kamal Faruqui, a senior board member, told ucanews.com that euthanasia in all its forms goes entirely against Islam.

"Human life is Allah's gift and we have no right to meddle with it, however bad the condition of the body," he said.

Bansi Lal Sharma, a Hindu priest based in Jammu, told ucanews.com that there is no place for euthanasia in the Hindu ethos.

"How could such a thing be encouraged? If a person is terminally ill, there should be dignified means adopted to take care of that person. You cannot simply ease a burden and kill him," Sharma said.

A better way to help terminally ill die with dignity would be to offer high-quality palliative care and greater support for caregivers, said Father Stephen Fernandes, secretary of the Indian bishops' Office for Justice, Peace and Development.

"The mark of a good society is its ability and willingness to care for those who are most vulnerable, not allowing them to die without food and medicine," he told ucanews.com.

Bishop Mascarenhas said the right to life enshrined in the Indian constitution does not include the right to die.

The court considered this constitutional issue, which was raised by petitioner Vipul Mudgal. His non-governmental agency Common Cause filed the petition seeking permission for euthanasia, arguing that the right to die with dignity is also part of the right to life.

"If a person is living a life of indignity because of a medical condition, he or she should not be subjected to artificial means of prolonging life," Mudgal said.

The verdict clarifies the Supreme Court's 2011 judgment that allowed passive euthanasia and set parameters for withdrawal of life-sustaining treatment from patients who are not in a position to make a decision.

The issue has been considered by the government since 2016

Mudgal said the central point of the verdict is that the right to die is based on a living will made by a person able to make such a decision.

The court also issued guidelines on the validity of a will and its execution. A will can be contested by family members in the court, which would then ask an expert team of doctors about whether passive euthanasia is needed.