Government is doing its best to resettle villagers under difficult circumstances, they say 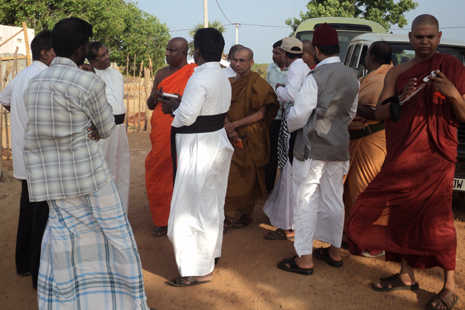 Religious leaders visiting displacement camps and a former war zone to check on the progress of refugee resettlement efforts say progress is slow but the government is doing the best it can under difficult circumstances. The Buddhist, Hindu, Muslim and Catholic representatives were visiting camps around Kilinochchi and Mulative in northern Sri Lanka, June 28-30. "We heard that progress resettling these people is slow, but if you visited these areas, you would understand how difficult it is, said Mohan Sharma Kurukkal, a Hindu priest. "We saw with our own eyes how hard the military is trying to resettle these people in their own land," said Buddhist monk Kamburugamuwe Vajira Thero. Tens of thousands of people were displaced as a result of Sri Lanka’s protracted civil war which ended in May 2009 with the defeat of the Liberation Tigers of Tamil Eelam. Since then the government has been seeking to resettle villagers, but some areas are still regarded as unsafe because of the risk from land mines. There are around 12,000 people still in camps waiting to be resettled, said Father Damian Fernando, former national director of Caritas Sri Lanka. The military say there are still places where de-mining efforts are ongoing, he said. Meanwhile, the government says the final stage of resettling displaced people on the Jaffna peninsula has been completed. The resettlement of 863 displaced families took place in Kevil, near Jaffna, recently. Ten houses built by the Sri Lankan army were also handed over to former refugees at a special ceremony. Related reports Religions commemorate end of warJaffna Muslims reopen mosque after 20 years