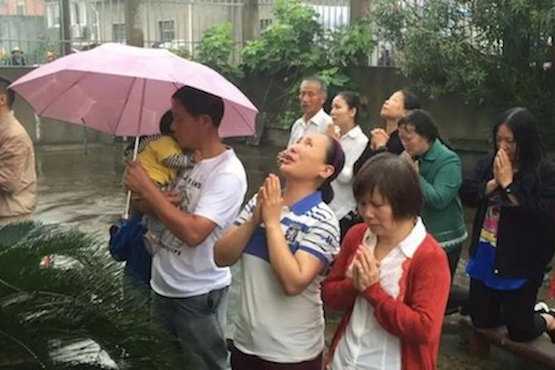 Chinese Catholics kneel and pray outside a Jingjiang church as they witness the removal of their cross. China's ruling communists increasingly stifled freedom of religion during 2015, says Amnesty International. (ucanews.com file photo)

Religious and ethnic intolerance rose throughout the Asia-Pacific region in 2015 due to discriminatory government policies, said an Amnesty International report launched Feb. 24.

"Some authorities [in the region] colluded in, or failed to address, an increasing trend of religious and ethnic intolerance, exclusion and discrimination," London-based Amnesty International said in its annual assessment of human rights around the world.

"Abuses were reported in countries in the Asia-Pacific region including Laos, Myanmar, Pakistan, Sri Lanka and Vietnam," the report said.

The report also underlined failures by the Indonesian government to protect the country's religious minority groups, including Christians in Aceh province.

"A government campaign to demolish churches and take down Christian crosses in Zhejiang province intensified and persecution of Falun Gong practitioners included arbitrary detention, unfair trials, imprisonment and torture and other ill-treatment," the report said.

Freedom of religion continued to be systematically suppressed in areas such as Xinjiang province and Tibet, the rights group said.

India was also cited as an area of concern with Amnesty accusing the authorities of failing to protect the rights of religious minorities.

"In India, authorities failed to prevent many incidents of religious violence, and sometimes contributed to tensions through polarizing speeches," the report said.

"Mobs attacked Muslim men they suspected of stealing, smuggling or slaughtering cows; and scores of artists, writers and scientists protested against what they said was a climate of growing intolerance," it added. Amnesty also said caste-based discrimination and violence remains prevalent in India.

Overall the general outlook for human rights in the Asia-Pacific is grim says Josef Roy Benedict, Amnesty's deputy director for campaigns in the region.

"Even as rapid and social and economic change continued in the Asia-Pacific region, the human rights situation often remained bleak," said Benedict.

"The increasing trend toward repression and injustice threatened the protection of human rights in the region," he said.

There was a pattern of violation against key freedoms such as freedom of expression and assembly, he said.

"Freedom of expression and assembly is a very fundamental right. But security forces clamped down on this in many parts of the region. Individuals — particularly — were restricted and criminalized because of this," he said.

Benedict also acknowledged that human rights activism driven by the young generation had increased in the region. "But at the same time, the governments used various forms to depress them," he said.

He citied Cambodia, Indonesia, Myanmar, Thailand and Vietnam as countries that intensified a crackdown on key freedoms.

"The human rights situation will become worse if the governments don't address these issues and if they keep shrinking the space for human rights defenders and activists," Benedict said.

"We are quite pessimistic about the future because of the fact that the governments have less and less political will to address and to engage many of these human rights issues," he added.