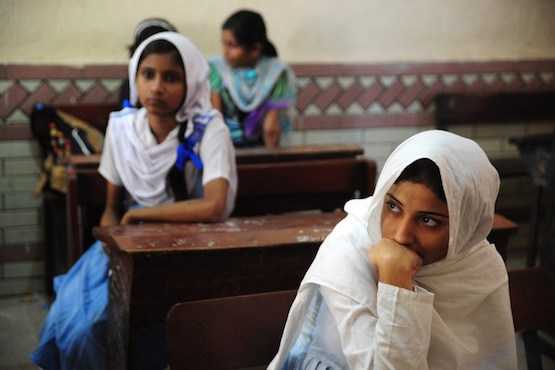 A file image of Pakistani schoolgirls attending class in a Karachi school. Some of Pakistan's public school textbooks have a strong Islamic orientation, while the country's religious minorities are either referenced derogatorily or omitted all together. (Photo by AFP)

Despite her fatigue Victoria (not her real name) somehow stumbled through her lesson at the local church school. Later the 45-year-old returned home to run her own informal academy to make ends meet. After that the Christian woman told her and her family's story.

Initially Victoria gazed into the distance as if grasping for something from the past. Then, as if pulling a thread, she started to speak. In 2013, they lived in Khanewal, a city in southern Punjab. She taught in a school and her husband ran a small shop. Everything was fine.

Her eldest son, Najam (all the names of the family have been changed) was in ninth grade. One afternoon, he returned from school mute and afraid. When Victoria asked him what was wrong, he said that he would not go to school any more.

Then it all came out. There was a boy who was a Hifiz Quran (one who could recite the Quran by heart) in his class. He was physically stronger than the other boys. He had thrown Najam to the ground and pressed his fist on his throat, "recite Kalma!" he roared. By reciting Kalma, one becomes a Muslim.

The next day Victoria complained about the incident and the school administration apologized and promised to address the issue but a few months later another incident forced the mother of three to relocate altogether. Both of her daughters were asked to recite Na'at (a praise to the Prophet Mohammed) in the school's morning assembly. Victoria could smell the danger beneath this development and, one night in December 2013, she and her husband left their jobs and moved their family to Lahore.

Victoria's children now study in a church school and have regained confidence and improved their educational prospects. Najam lost a year of school due to the upheaval and is taking extra lessons at an academy so he can apply for further education. But hostility resurfaced.

Najam and a Christian friend were learning Islamiat (compulsory Islamic studies). The teacher was not following the textbook but preaching to his students. He claimed that the universe was created for Muslims only and therefore the killing of Christians, Jews and Hindus was justified, said Najam.

"I and my other friend were trembling with fear. We felt if anyone found out about our religion they would tear us to pieces," Najam said.

The U.S. Commission on International Religious Freedom in its 2011 report found that textbooks used in Pakistani primary and secondary schools fostered prejudice and intolerance of religious minorities, especially Hindus and Christians. Intolerant references were not just restricted to Islamic studies textbooks either; they were found in elementary and advanced social studies texts used by all public school students, including non-Muslims, according to the report.

Moreover, the textbooks contain stories, biographies, and poems with an Islamic religious character that students of minority faiths must study and be tested on. Pakistan's religious minorities were either referenced derogatorily or omitted all together. Hindus were described in especially negative terms and references to Christians were often inaccurate and offensive.

In a landmark judgment in June 2014, Pakistan's top court directed the federal and provincial governments to develop a curriculum to promote a culture of religious and social tolerance. But minority groups say that very little has been done to implement the court's decision.

In February this year, Pakistan's National Commission for Justice and Peace (NCJP), the rights body of Catholic Church, released a report on the hate material taught in schools. The report, Freedom from Suffocating Education says the government has failed to keep its promise to rid the syllabus of prejudice and discriminatory material towards religious minorities.

"Ahmadis [a minority Islamic sect] have been declared non-Muslims through a constitutional amendment and there is punishment under the law for Ahmadis to call themselves Muslims," said Tahir Dhindsa, head of Policy Advocacy at the Sustainable Development Policy Institute . "What options does an Ahmadi student have other than hiding his identity to escape the punishment and hatred?"

"The same is true for other minorities including Hindus and Christians who have to study materials which are biased and discriminatory towards their beliefs," he said.