Reactions to tyranny threat, attacks on churchmen are seriously wanting, they say 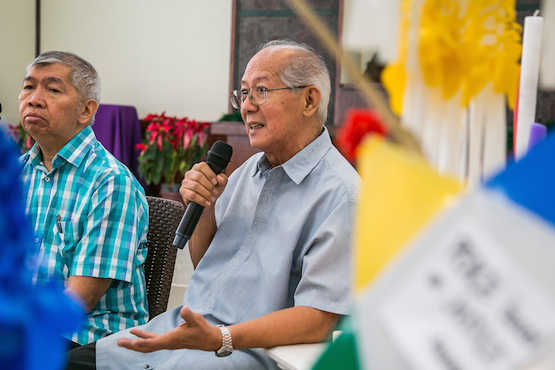 Father Wilfredo Dulay (right) calls on Philippine Church leaders to be more vocal in standing up for human rights during a media briefing in Manila on Dec. 15. (Photo by Mark Saludes)

Philippine Catholic bishops are wanting in their reaction to what activists described as "threats of tyranny and dictatorship" in the country, prominent religious groups say.

The "Religious Discernment Group" of nuns, priests, and seminarians, accused Catholic bishops of doing nothing over the recent killing of a priest.

Father Wilfredo Dulay of the Missionaries Disciples of Jesus said it is now up to the people to convince bishops to "stand against oppressive and violent state policies."

The priest lambasted the church hierarchy for what he described as the "lack of outrage" over the recent  killing of Father Marcelito Paez of San Jose Diocese in Nueva Ecija province.

"Is the death of Father Paez not enough to wake up church leaders?" said Fr. Dulay. "The bishops must start living with the people if they really want to initiate change," he said.

The priest said the killing was an indication that the killers do not respect "even a man of God."

The group Promotion of Church People’s Response claimed that 36 church workers, including three priests, have been killed in the Philippines since 2001.

"Our bishops shouldn’t wait for another dead priest before they stand against the extension of martial law in Mindanao," said Father Rolando de Leon, chairman of the organization.

Sister Ellen Belardo of the Rural Missionaries of the Philippines warned that what happened to Fr. Paez can happen to any church worker who works with the poor.

The nun said church leaders must "come up with one voice against the rise of tyranny."

Fr. Paez, a member of the board of the Rural Missionaries, was shot multiple times by unidentified assailants on Dec. 4. He was a known critic of the government and hours prior to being shot had helped negotiate the release of a political prisoner.