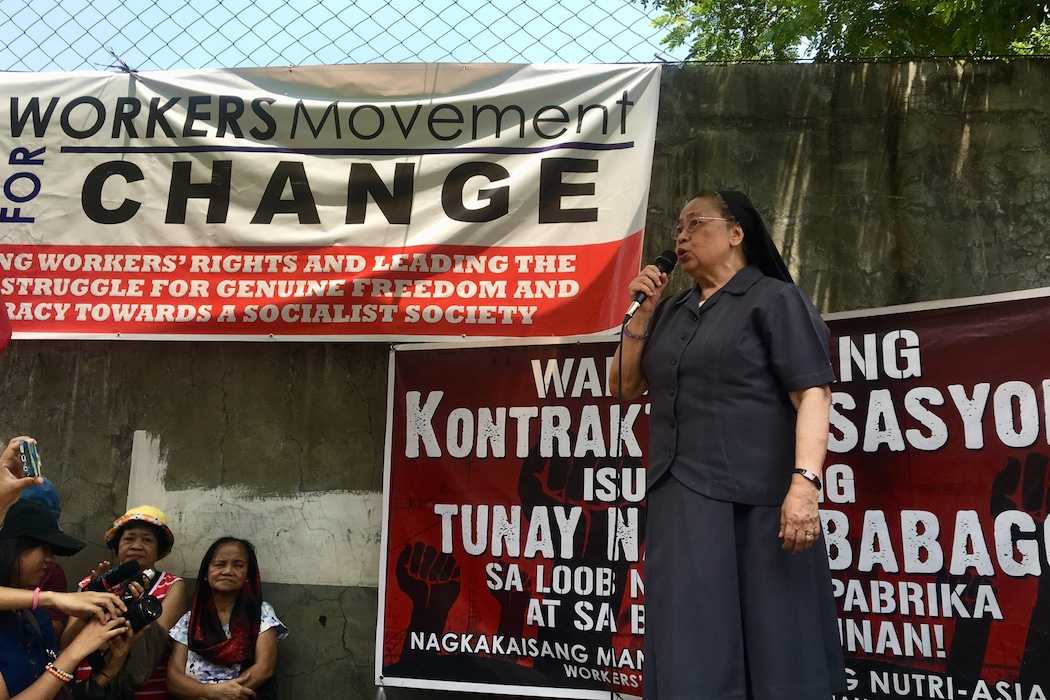 Benedictine nun Mary John Mananzan speaks before striking workers in the province of Bulacan north of Manila on June 23. (Photo by Inday Espina-Varona)

Catholic nuns and Protestant pastors are leading religious groups who have fanned out across the Philippine capital and nearby provinces to show support for striking workers.

A series of strikes have erupted over the last week in opposition to the so-called labor-only contracting scheme, which has been blamed for the lack of employment tenure among many workers.

Labor-only contracting is the practice of using agents or manpower agencies to recruit casual workers on behalf of a bigger business, so the latter can circumvent labor rules and avoid hiring regular employees, consequently making it easier to sack people.

The presence of church people in picket lines appeared to deter clashes between protesting workers and police, observers said.

Benedictine nun Mary John Mananzan told striking workers that the Catholic Church has been consistent in recognizing their "need to live in dignity."

The activist nun led a group of religious women to a manufacturing plant in Bulacan province on June 23 to assure striking workers there of church support.

"Pope Francis is at one with your struggle to escape poverty and live in dignity," said the nun.

She added that the pontiff recognizes the "right to job security, to form unions, and to strike for better work conditions."

The 80-year-old nun has been fighting for workers' rights since 1975 when she and other nuns joined the picket lines of a liquor company in Manila in the middle of martial law.

She recalled that she was appalled by the violence that erupted then and outraged when policemen hit workers while sparing her and the other religious workers.

The company, however, refused to grant the workers' demand despite pronouncements by Philippine President Rodrigo Duterte that he would stop the practice of casual labor contracting.

A police dispersal operation outside the NutriAsia plant on June 14 landed at least seven workers in the hospital. Police also arrested 24 others, although only four labor leaders still remain in jail.

Over the weekend a dozen Benedictine sisters joined about 500 doctors, teachers, legislators, artists, and youth leaders in a caravan that brought food, medicine, and other supplies to the strikers.

Catholic seminarians and priests have also reinforced other picket lines in another part of the capital.

On June 24, the National Council of Churches in the Philippines also organized a "solidarity mission" participated in by Protestant churches.

"We stand with all struggling workers," said Darlene Marquez-Caramanzana, a council representative, adding that the organization "is committed to support workers with prayers and actions."

According to the Labor Department, 1.33 million of 4.47 million Filipino workers employed in at least 8,000 companies in the country do not have regular employment status.