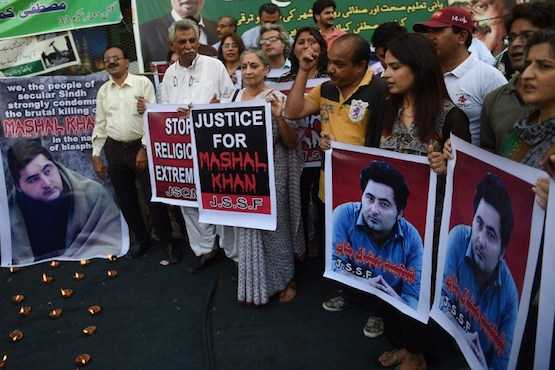 Pakistani demonstrators take part in a protest the killing of student Mashal Khan in Karachi on April 22. Pakistan police announced April 17 they had arrested 22 people after the lynching of a university student accused of blasphemy, but observers said there was little hope authorities would secure convictions. (Photo by Rizwan Tabassum/AFP)

Mashal Khan was a humanist, interested in socialism and a former member of the Awami National Party, the largest secular and liberal force in Pakistani politics. He liked debates and believed in the philosophy of non-violence.

These were the words of Professor Ziaullah Hamdard, a faculty member of Abdul Wali Khan University, that recently witnessed one of the grisliest incidents in the country's history.

Khan, a journalism student, was shot to death and his lifeless body was mutilated by a senseless mob of students, faculty members and security. Unsurprisingly, it was trumped-up charges of blasphemy that inflamed the mob.

A couple of days before Khan was silenced forever, he had questioned the state of affairs at the university in a TV interview. For the university's administration, Khan went too far and deserved nothing short of death, a motive which was effortlessly achieved by spreading false rumors of blasphemy.

More tragic still, a mosque imam refused to perform funeral for Khan and took to the loudspeakers to discourage people from attending his last rites.

"I never heard Khan talking impiously. It would be unjust to call him a loony and profligate as he never committed blasphemy. He was a smiley person and had leadership qualities," Professor Ziallah Hamdard said in a statement to police.

The professor then announced that he was resigning his post for failing to save Khan from the mob.

The way things are going, I am afraid Khan will not be the final victim of religious violence. Many similar people are under threat from religious bigotry which is on the rise.

Just a week after Khan's killing, a mentally ill individual would have met the same fate if it were not for a mosque leader who rescued him and handed him over to police. The next day, the mob took revenge on the cleric by torching his car.

Religion is a sensitive issue in deeply-conservative Pakistan. Over here, differences are rarely tolerated and when it comes to religion, a mere difference of opinion can be treated as blasphemy where the mob ultimately becomes the judge, jury and executioner.

Often, your association with a particular faith can become the reason for your demise. Take the example of Dr. Tahira Malik, a retired female professor from Punjab University who was stabbed to death in her house. Investigation revealed that the female professor was a member of the Ahmadiyya community, a Muslim sect who are persecuted in Pakistan.

When Mumtaz Qadri swung from the gallows last year for murdering Governor Salman Taseer for alleged blasphemy, the government sent a strong message to extremists. However, the huge numbers of supporters who attended his funeral was astonishing. Pakistani Muslims raise their hands as they shout slogans outside the tomb of Mumtaz Qadri, who was hanged in February 2016 for the murder of a governor who criticized Pakistan's blasphemy law and defended a Christian woman, in Bara Kahu on the outskirts of Islamabad on March 1 on the last day of a period marking the anniversary of his hanging. The state's decision to execute him provoked uproar among Islamists. (Photo by Aamir Qureshi/AFP)

This goes to show that deterrence in the form of capital punishment or lengthy jail terms is not enough and we need meaningful and bold legislation.

The state has seldom acted boldly to amend the draconian blasphemy laws. Khan's killing is yet another chilling reminder for the state to act swiftly before the menace engulfs us all.

Rights activists have repeatedly warned the state of potential dangers posed by blasphemy laws not only to religious minorities but to all those who dare to question its misuse. Catholic minister Shehbaz Bhatti and liberal governor Salmaan Taseer were even assassinated for seeking to reform the blasphemy laws.

There are more factors which warrant the government's attention. Uneducated youth and even the educated ones are easily riled by speeches from local clerics that are laced with hatred and entwined with malice.

Pakistan's abysmal socio-economic situation also plays a part in producing extremists who would willingly die in the name of religion. A man with nothing to lose is a dangerous tool for extremists.

We need to broaden the reach of education in our country and reform its syllabus to purge the darkness before it fully brainwashes our next generation.

Clerics who promote hatred, on the street or social media, should be thrown into jail or given exemplary punishments. The provision of health, education, employment and recreation will provide laypeople in Pakistan with something other than poverty to look forward to.

Unless meaningful reforms are introduced, religious tolerance and a progressive Pakistan remains a distant thought.