Crackdown by the authorities is illegal, says a religious watchdog Association to Protect Freedom of Religion 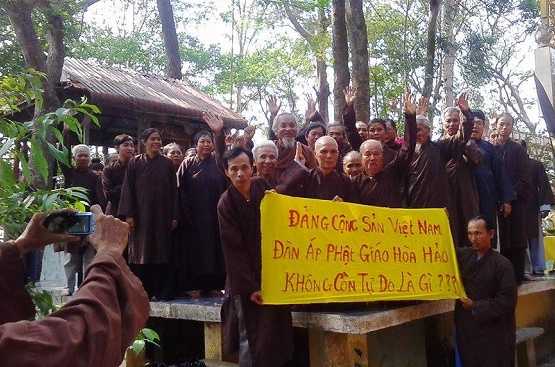 Hoa Hao Buddhists from An Giang raise a banner saying "Communist Party of Vietnam's crack down on Hoa Hao Buddhism. No freedom" on April 2, 2016 after police brutally beat them and prevented them from entering Quang Minh Tu Pagoda to commemorate the death anniversary of their Founder Huynh Phu So. (Photo supplied)

If you are following a non-sanctioned religion in Vietnam you can expect harassment from the authorities, according to a religious freedom watchdog.

"We recorded 59 violations of religious freedom by the government in 2016, an increase of nine from 2015," Father Anthony Le Ngoc Thanh, head of the Vietnam-based Association to Protect Freedom of Religion, told ucanews.com. Father Thanh said the authorities targeted Catholics and followers of unrecognized religious groups such as Cao Dai, Hoa Hao Buddhism, the Unified Buddhist Sangha of Vietnam and small Christian groups in remote areas.His organization issued a fourth-quarter report on Jan. 11 that showed 22 cases took place over the past three months."The instances of religious persecution got increasingly worse," he said, adding that government authorities encroached on the travel rights of dignitaries and coerced religions into giving up property.

He said small religious groups were blocked from attending services including Christmas and treated inhumanely by officials.

Most of the 27 violations against Catholics related to brutal attacks on priests and laypeople in remote areas and conflicts over church property. Authorities also destroyed Catholic crosses and statues and stopped priests and even bishops from visiting Catholics in remote areas.

The report also recorded a typical case in which security officials threw rotten eggs into Hoa Hao Buddhist homes in the southern provinces of Vinh Long and Dong Thap and prevented them from celebrating the 71th death anniversary of four followers who were killed by communists."These violations show that the authorities have defied the constitutional ban on infringing religious freedom," the report concluded.Father Thanh said although government officials know that their crackdown on religions is wrong and illegal but they continue in the name of maintaining social order and economic development.Last November, the country's first ever Law on Belief and Religion was passed by the National Assembly. It bans religions from running schools and hospitals. Local religions are only allowed to offer preschool education."Negative issues still remain in the relationship between the government and religions," Bishop Peter Nguyen Van Kham, secretary general of the Catholic Bishops' Conference of Vietnam, told a national meeting held by the government in Ho Chi Minh City on Dec. 19.Fifty-five religious leaders met with Prime Minister Nguyen Xuan Phuc and other high-ranking officials at the event.Bishop Kham said the new law "fails to properly care about the people's need for religious activities."The bishop added that he hoped the government would change its attitude toward religion in the future.Vietnam officially recognizes 39 religious organizations from 13 religions, with a total of 24 million followers, more than 6 million of them Catholics, served by 83,000 clergy out of a population of 90 million.