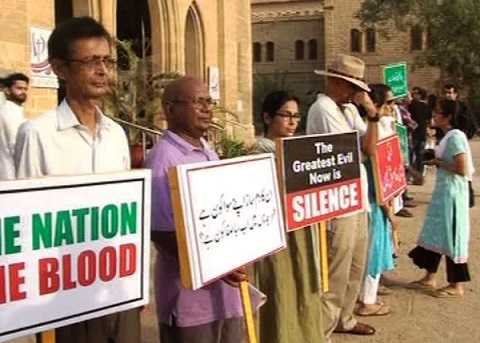 Hundreds of Christians and Muslims joined hands in Karachi on Sunday to form a human chain in a rare show of unity in the wake of the September 22 terror attack on a church in Peshawar.

At least 85 people were killed and more than 140 wounded when two suicide bombers blew themselves up at All Saints Church in Peshawar immediately after Sunday Mass in what has been described as one of the most deadly attacks on the beleaguered religious minority in Pakistan.

Muslim Shia and Sunni clerics as well as Christian clergy were among those who gathered at St Patrick’s Cathedral in Karachi for a “day of prayer and resistance against terrorism.”

The event was organized by a group of friends under the banner “Pakistan for All” and was supported by the National Commission for Peace and Justice.

“A Pakistan I have dreamt of: a Shia cleric, a Christian pastor and a Sunni mufti were sitting together in the first aisle of St Patrick’s Cathedral, Karachi,” Mohammad Jibran Nasir, one of the main organizers, told ucanews.com on Sunday.

“The objective of this initiative was to demonstrate interfaith harmony among Pakistanis and express solidarity with the relatives of Peshawar victims,” he said.

Hindus also took part in the demonstration, he said.

“We all are children of Adam and Eve. The attack on the Peshawar church was not only against Christians, it was against the entire country,” said Fr Sal Deigo, a priest at the cathedral.

Participants formed a ring around the cathedral and held hands to form a human chain.

“We are here to show that we respect all religions. We all are Pakistanis and we all are one,” said Sharmila Farooqui, a Sindh lawmaker.

“We are all together. We are one. We are not divided on the basis of our faiths,” prominent Pakistani model and actress Sanam Saeed said.