Faith leaders can be a bridge in a divided country 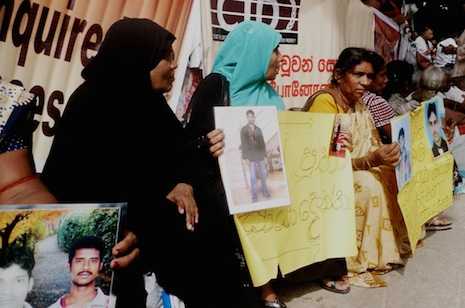 Relatives of those who 'disappeared' during Sri Lanka's civil war urge justice for their loved ones in Colombo. (File photo by ucanews.com)

The long-anticipated and much resisted United Nations investigation report into alleged war crimes committed during the last phase of Sri Lanka's civil war released to the government on Sept. 11 by the Office of the U.N. High Commissioner for Human Rights.

The government had until Sept. 16 to reply before the U.N. Human Rights Council in Geneva takes up the matter.

The release of the report was originally scheduled for the council's March 2015 session. However, it was delayed following a request by the new government that took office after Sri Lanka's presidential election in January.

The election saw the defeat of wartime president Mahinda Rajapaksa and a new administration under President Maithripala Sirisena.

Reports say the investigation team has made strong cases against both the government and rebel Tamil forces for war crimes.

Last year, the United States, which sponsored the resolution that established the investigation, called for an international probe. However, the new government appears to have succeeded in persuading the United States and its allies to agree to a "credible domestic inquiry" after the findings are made known.

Public opinion in Sri Lanka among the ethnic Sinhalese majority was decidedly against any international investigation into the past. The U.N. investigation is seen as being instigated by the ethnic Tamil minority and the international community that wishes to reverse the outcome of Sri Lanka's three-decade-old civil war that came to an end with the crushing defeat of the rebel forces.

The allegations of war crimes are not all one-way. In the final phase of the war, the Tamil rebels held a large section of the Tamil civilian population as human shields. The former Sri Lankan government that prosecuted the war to its finish, denied allegations of mass civilian killings in smashing its way through this human shield or of other war crimes. It also refused to accept the need for an international investigation on the basis of national sovereignty.

Sri Lanka's foreign minister, Mangala Samaraweera, addressing the Human Rights Council in Geneva on Sept. 11, laid down the parameters of the government's plan for postwar justice and reparations.

The government, he said, will set up "independent, credible and empowered mechanisms for truth-seeking, justice, reparations and guarantees of non-recurrence."

This would include the establishment of a truth and reconciliation commission set up in consultation with South African authorities, as well as an office on missing persons "in line with internationally accepted standards."

The government will also set up a "judicial mechanism" aimed at addressing victims' rights and the problem of impunity, and a body to handle reparations.

However, the vast majority of Tamils want the response to the report of the U.N. investigative team to include an international mechanism. They completely reject a domestic one, believing it would never yield a positive result.

Winning Tamil acceptance for the domestic mechanisms envisaged by the government is going to be very difficult.

It is in this polarization context within the polity that the government has proposed the formation of a "compassionate council" consisting of religious leaders to be a truth-seeking mechanism that will be part of a "commission for truth, justice, reconciliation and non-recurrence."

Faith can be a bridge

However, it was only a small section of the religious clergy who took extreme nationalist stances both during and after the war.

Religious communities, as a whole, rejected extremism. This was seen when anti-Muslim sentiment was deliberately stoked by a section of the previous government utilzsing a Buddhist extremist organization.

However, this organization was not able to influence the larger Buddhist religious community, and performed dismally during the general election in August.

There are religious leaders such as leading Buddhist monk Venerable Maduluwave Sobitha who have become a bridge in the postwar years.

This has enabled civil society groups, such as the National Peace Council, to establish district-level interreligious committees to engage in local conflict mitigation activities.

The Lessons Learnt and Reconciliation Commission appointed in 2011 by the previous government also noted that the core values of the four religions practiced in Sri Lanka — Buddhism, Hinduism, Islam and Christianity — enabled a basis on which reconciliation could be constructed.

That report called on civil society to play an active role in addressing issues of social and national integration. These included the formation of interreligious committees at the grassroots level and people-to-people exchanges.

The goal was to strengthen the voice of moderate religious leaders in all communities, and thus counteract the dominant discourse of narrow ethnic and religious nationalism that was propagated during the war and immediate postwar periods.

An important challenge for the future will be to strengthen an introspective perspective that builds empathy for the other rather than engaging in finding faults.

The religious clergy are very close to the ethos of the people and play the role of counselors, guides and educators in the absence of formal structures to provide those services.

It is therefore a natural part of their role to bring the community together. But they also need to be made more aware of the issues arising from the past, and the different options for truth, justice and reconciliation that are available internationally to address them within the framework of the domestic mechanism for truth, justice, reconciliation and non-recurrence.

Dr. Jehan Perera is executive director of the National Peace Council of Sri Lanka. He is also a regular columnist to national newspapers. He holds a Doctor of Law degree from Harvard Law School and a B.A. in Economics from Harvard College.