An Indonesian woman scavenges for recyclable items at a dump in Jakarta. The capital of Southeast Asia's biggest economy produces around 6,500 tonnes of rubbish a day but does not have an official recycling system. (Photo: AFP)

The Jakarta Provincial Government in collaboration with various religious groups, including the Catholic Church, has released a series of books that adherents of major religions in the Indonesian capital can follow to help avert and overcome environmental emergencies

They were released on Dec. 3 through the Local Governments for Sustainability Indonesia Foundation and representatives from Indonesia’s six recognized religions — Islam, Protestantism, Catholicism, Hinduism, Buddhism and Confucianism.

The books cover religious perspectives relating to humans and climate change, general guidelines for environmentally friendly houses of worship, and sermon pocketbooks for each religion.

"These books will be disseminated to respective religious leaders and houses of worship to become their guides," Jakarta governor Anies Rasyid Baswedan said.

He said they are expected to provide a good understanding of the issue of climate change so that all religious communities can actively become part of a movement to cut emissions and adopt adaptive development.

"The guidelines will unite us in trying to save Jakarta and our planet," he said. "All of these efforts are part of leaving a better environment for our children and grandchildren and future generations?"

Divine Word Father Yohanes I Wayan Marianta, who helped write the books, said Catholics can play an important role in the fight against climate change.

“Earth is our common home. The pope invites all people of goodwill to dialogue about the future of planet Earth and human civilization, which is threatened by an ecological crisis,” he said.

Within the Catholic Church itself, there have been many concrete steps taken to overcome environmental problems, including parishes carrying out their own environmentally friendly waste management programs, which it is hoped will be developed on a wider scale. 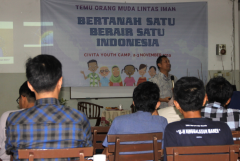 Meanwhile, Oblate Father Peter Kurniawan Subagyo, adviser to the Environmental Care Observers, a group of environmental activists in Jakarta Archdiocese, said that involving religions in overcoming environmental problems is important so that action to save the earth can be carried out at all levels in society.

"The content of these books carry great weight and have been carefully prepared by Father Yohanes I Wayan Marianta," he said.

He hoped the books "will become a guide and inspiration for priests, teachers, catechists and the general public.”

Melky Nahar, a Catholic activist and campaign manager for the Mining Advocacy Network, told UCA News that the important thing is that religious leaders must keep speaking out in support of the environment everywhere, not just in Jakarta.

"Environmental damage is being created everywhere," he said.

According to air quality monitor Airvisual, air pollution in Jakarta is among the worst in the world and was the worst in August 2019.