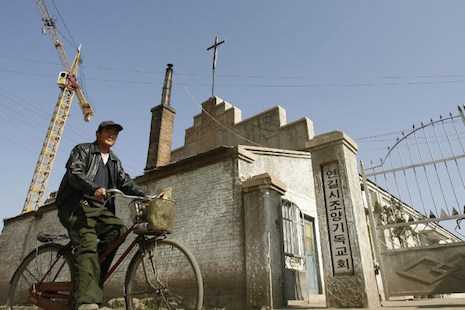 A man cycles past a Korean church in Yanji in Yanbian on the China-North Korea border in this file photo. For North Korean refugees, Christian aid groups are crucial in providing shelter and aid. (Photo by Peter Parks/AFP)

North Korean prison authorities asked a host of questions, says Im Eun-ha, then a petrified 13-year-old girl. They demanded to know if she had tried to defect to South Korea during five illegal years across the border in China ending with her capture by police.

"The main question though was: 'did you go to church?'" says Im, recalling how she lied about converting to Christianity in China. "This seemed to be their biggest concern."

Still considered the toughest of missionary assignments, atheist North Korea has seen unprecedented exposure to Christian missionaries since a famine caused thousands like Im to flee to China in the late 1990s. After the collapse of the state distribution system, Christian aid groups have stayed on along the border, offering everything from food to clothing — and faith.

Before the famine that killed upward of 300,000 people, North Korea was hermetically sealed to religious groups, its people forbidden from worshipping anyone but the ruling Kim dynasty. Few of the Christians that made up 13 percent of Pyongyang's population in 1945 — before partition and the subsequent Korean War — are thought to still be alive.

Those who have in recent years reached China, converted and been forced back are reportedly more numerous. Some, like Im, have managed to escape to China again. Others remain trapped in a country ranked among the least tolerant of religion. Some 300,000 Christians reportedly live in North Korea with about 60,000 believed to be imprisoned due to their beliefs, according to Open Doors, an international ministry that tracks worldwide Christian persecution.

The North Korean regime claims 3,000 Catholics worship freely under the state-run Korean Catholic Association, while the U.N. says there may be just 800 Catholics.

Although debate continues as to whether the few churches in Pyongyang are staged for foreign guests, there is strong evidence of secret worship. A Christian bookstore in Dandong, along the North Korean border. (ucanews.com photo)

Im was released from prison after three months following her capture and return from China, and ended up with her aunt in Yeosu, a small town on the North Korean side of the border. For five months, she was one of the many thousands of underground Christians believed to exist inside the country.

"Every day I prayed secretly because at the time I was terrified," she says.

Dozens of Christian missionaries and aid groups work inside providing food aid and running kindergartens and other projects, according to EngageDPRK.org, which tracks them with an interactive map.

Some are able to reach Christians with aid and prayer. Many don't take the risk, content to work in God's name without pushing the limits of the regime's strict rules against spreading religion.

In her book "Without You There is No Us,” published last year, Korean-American author Suki Kim writes about teaching at the then-new Pyongyang School of Science and Technology run by foreign missionaries. She documents an unexpected alliance between a group of Christians fixated on a chance at "the holy grail of evangelization" and a regime desperate for free facilities and English tuition. At one point, government minders agree to allow the university's elite students to watch "The Chronicles of Narnia."

"The missionaries wanted to secretly convert them, but not in an obvious way," writes Kim.

Most have had far more luck introducing North Koreans to Christianity once they reach China. About 1,000 missionaries are estimated to operate out of Yanbian, a Korean prefecture in China that lies north of the 1,420-kilometer-long border separating the two countries. Many missionaries also double as businessmen to avoid detection in the main trade hub on the border, Dandong. Still, Chinese authorities have clamped down, particularly since the Beijing Olympics in 2008.

A Canadian Christian couple, who worked with North Korean refugees and ran a coffee shop, were arrested in Dandong in 2013. In December 2014, Chinese authorities arrested Korean-American missionary Peter Hahn in Tumen, Yanbian. He was released in August, returning to Seoul where he told ucanews.com he was "recovering" and declined to say more.

A Protestant church in Dandong, along the border with North Korea, offers defectors a chance to worship in freedom. (ucanews.com photo)

Tim Peters, a "card-carrying pastor" from Michigan who prefers to be called a Christian activist as the head of Helping Hands Korea in Seoul, has helped North Koreans in China since the famine. He says the recent "tightening of the screw" has slowed the number of North Koreans escaping across the border and hampered missionary work.

"That said, more and more of the evangelism is being carried out by North Korean believers themselves as a result of nearly 20 years of missionary activity along the border and encouragement to the underground church inside North Korea," he says.

Peters has helped hundreds of defectors along the "underground railroad," working with brokers to get them through China, into Laos and on to the relative safety of Thailand where many head to the South Korean embassy.

Since the famine, about 30,000 North Koreans have made it to Seoul, according to South Korean government figures.

Im spent five months back inside North Korea before again crossing the Tumen River to China. A pastor eventually helped her get to Beijing by bus. Im is one of the few North Korean defectors who managed to evade Chinese authorities to reach the South Korean embassy in Beijing in recent years.

Meeting outside a department store in eastern Seoul 12 years after her escape, she talked about how she had become a member of her local church, otherwise saying little about her faith.

"There are many North Korean Christians in Seoul," she says. "That's because almost all of us are here because of the help we received from Christians."

Conversion rates of 75 percent have been recorded among arriving defectors in recent years, says Jung Jin-Heon, a researcher at the Max Planck Institute in Germany who is due to publish a new book on North Korean migrants engaging with Christianity.

Arriving North Koreans are required to spend three months in Hanawon, a re-education center on the southern outskirts of Seoul. Instructors there give lessons on coping in a capitalist society, and Protestant, Catholic and Buddhist groups have access, holding regular services and offering food.

"Every step, from North Korea to the South, defectors are exposed to Christianity," says Jung. "So it's not surprising they think it's some divine power that has helped them."