Religion can play a role in Myanmar's development Cardinal Charles Maung Bo of Yangon has played a leading role in bringing religious leaders together as they seek ways to help the strife-torn country piece itself back together and move forward.

A May 7-8 event brought over 200 interfaith leaders and representatives from the government, parliament, military, ethnic organizations, the United Nations and NGOs to Naypyitaw, Myanmar's remote capital. It was the second advisory forum organized by the local branch of Religions for Peace (RfP), working toward peace and national reconciliation. The first forum was held in November 2018.

Cardinal Bo, the patron of RfP (Myanmar), said during his speech on May 7 that "we gain nothing from fighting each other, from killing our brothers and sisters."

"Those who grew up in conflict areas fear they will never taste peace. All of us here in the forum are walking the path of peace," he added.

The long-running conflicts in Myanmar's smaller states with large Christian populations — Chin, Karen and Kayah — appear to have ended. However, they have forced more than 100,000 people across the Thai border and into refugee camps.

The resumption of a violent struggle in 2011 that had been dormant for 17 years resulted in more than 100,000 people being forced into camps for internally displaced people in Myanmar's Kachin and Shan states. 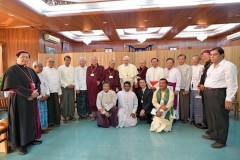 Interfaith leaders aim to see religion play a role in peace and reconciliation as Myanmar transitions to becoming a full democracy after more than 50 years of military rule.

"We believe in the greater role of religious leaders as we are committed to building and strengthening a multi-ethnic and multi-stakeholder mechanism for dialogue and action," Myint Swe told ucanews.com.

"We not only give suggestions to the government, but RfP Myanmar is also working on projects in these [troubled] communities."

The forum established five standing committees for education, equal rights and responsibilities for all ethnic communities; women's empowerment and participation; youth empowerment and engagement and identity; diversity; and common challenges in Rakhine State.

RfP Myanmar is also working on vocational training and educational projects in conflict-torn Kachin and Rakhine states with the support of RfP International.

Religions for Peace, founded in 1970, is the world's largest and most representative multi-religious coalition that advances common action for peace among the world's religious communities. A women's group discusses pressing concerns at the peace and reconciliation forum, which ran from May 7-8. (Photo courtesy of RfP Myanmar)

Al Haj Aye Lwin, a Muslim and co-founder of RfP Myanmar, said the forum creates an "open space" for dialogue among all stakeholders in order to tackle various issues the country has faced.

He said it was encouraging that the government has acknowledged the role of religious leaders in Myanmar's peace efforts.

"All participants get a chance to find out the root causes and discuss how to find solutions toward peace and reconciliation," Aye Lwin told ucanews.com.

He acknowledged the country's myriad problems could not be solved in one sitting and said the focus must be on durable peace.

The Muslim leader said the peace process is moving in the right direction despite various setbacks during negotiations among stakeholders. "Doubt and distrust are the main barriers," he said.

Peace is a priority for Suu Kyi, who initiated the 21st Century Panglong peace conference in August 2016 and reconvened it in May 2017 and July 2018. However, renewed fighting in Rakhine has hampered efforts to engineer a fourth edition.

The Nobel laureate has pledged to end hostilities in the country that has been bedeviled by conflict for nearly 70 years. Ethnically and religiously divided Rakhine made global headlines after a bloody crackdown by Myanmar's military in August 2017 forced more than 700,000 Rohingya Muslims to flee to neighboring Bangladesh.

Renewed fighting between the military and the Arakan Army since December has further marred the situation in Rakhine, resulting in over 33,000 people being displaced.

Kyaw Min, chairman of the Yangon-based Human Rights and Democracy Party, which fights for Rohingya rights, attended the forum and stressed the need to create safe conditions on the ground for the refugees to return home.

He said the priority should to resettle them in their original areas and have talks about granting them proper citizenship.

He said the government has issued national verification cards (NVCs) that make most Rohingya feel like foreigners. "They won't come back if they are forced to accept the NVCs," Kyaw Min said.

The government needs to create the right conditions for their safe and dignified return, he noted.

A letter released by RfP International on May 24, 2018, highlighted the crisis in Rakhine as well as the efforts being carried to resolve this.

Cardinal Bo and other interfaith leaders visited Rakhine on May 27, 2018. They inspected transit and reception centers and met with local Rohingya, Hindu and Mro communities.

From the air, the delegation reported seeing hundreds of Rohingya villages that had been destroyed during the military's "counter-insurgency" campaign against Rohingya militants.