Christians find themselves courted by electioneers 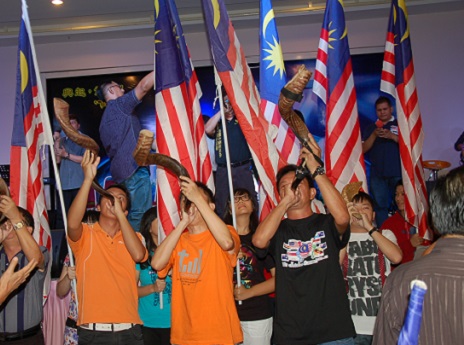 There are no spare seats left in the Protestant Holy Seal Church on the third floor of City Mall in Kota Kinabalu. At least 1,000 people have come to pray at this gathering in the capital of Malaysia’s Sabah state on Monday night.

More than 50 of this group of mainly young people wave huge red, white and blue Malaysian flags while another 20 or so blow shofar - traditional Jewish horns usually seen at synagogues.

This is just one of many such events organized by the Christian Federation of Malaysia as the country heads to the ballot box on Sunday in the closest election in memory.

“We pray that our votes will count,” says one of the Christians, who gave her name as Marilyn. “You know, there is always a lot of cheating in our general elections.”

For the first time since Malaysia gained independence more than half a century ago, the dominant United Malays National Organization (UMNO) is facing the possibility that the opposition alliance may win. Malaysian politics is a complex, divisive affair, typically fought along ethnic and religious lines. Malays make up the majority at just over 50 percent of the population, followed by Chinese with more than 23 percent and ethnic Indians at just over seven percent. Those remaining are mostly indigenous people on the fringes of political and economic power.

Numerous advantages are enshrined for the Malay population. They are favored in the public education system, benefit from majority quotas in parliament and are required business partners when Chinese and Indians bid for state contracts.

More than 60 percent of the population are Muslim – the constitution forbids ethnic Malays from practicing any other religion – while nearly 20 percent are Buddhist, more than nine percent Christian and just over six percent Hindu.

Since the UMNO-dominated coalition failed to retain its two-thirds majority at the last election, minority religious groups have found themselves at the sharp end of Malaysia’s fractious political landscape, particularly Christians.

The opposition coalition Pakatan Rakyat (PR) with charismatic Anwar Ibrahim as de-facto leader, offers a core promise of an inclusive, just and corruption-free Malaysia. This has resonated equally well with Malays, Chinese and Indians. The PR may have lost the 2008 election but it deprived the ruling coalition of its claim as the sole representative of Malaysian Islam and Malays.

To keep Malay Muslims on its side, UMNO has been on an Islamist agenda since 2008. Its allies, the Islamic nationalistic organisation Perkasa, as well as the largely UMNO-owned media began to demonize Christians. Their message: Christians are threatening Islam and only UMNO and the ruling coalition can save Malaysia from becoming a Christian state.

“They use Islamic hardliners as pawns in their political game,” says Ronnie Klassen, a prominent and outspoken Catholic activist and blogger.

In recent years, the government has forbidden Christians from using ‘Allah’ as the translation for the word ‘God’ in publications. In 2010, customs seized thousands of Bahasa-language Bibles imported from Indonesia, prompting radical Perkasa chief and ruling coalition candidate Ibrahim Ali to call for them to be burned.

Meanwhile, the daily newspaper Utusan Malaysia accused Christians of plotting to overthrow Islam. And Parti Islam se-Malaysia, the main Muslim party in the opposition alliance, recently performed a U-turn on the hotly debated ‘Allah’ issue and agreed that the word should not be used by Christians and even went as far as saying it wanted Hudud, the strict Islamic penal code, to be imposed if it gets into power.

But Christians are fighting back. There have been mass prayer sessions like the one in Kota Kinabalu on Monday, a “Vote Wisely” video on Youtube and regular panel discussions featuring luminaries like Klassen. Commentators have begun to talk of a Christian political awakening.

Catholic Bishop Dr Paul Tan Chee Ing has warned voters of the dangers of another two-thirds majority for the UMNO-led coalition.

“Such a majority would be used to deprive Malaysians of their rights guaranteed in the … constitution,” says Ing, head of Melaka-Johor diocese south of the capital Kuala Lumpur.

Most recent opinion polls put the UMNO-led coalition neck and neck with the opposition while others have it slightly ahead – either way it’s the closest election race in Malaysian history.

But whether the opposition can live up to its promises of equality and justice remains to be seen. The three main opposition parties lack unity and in some constituencies even fight each other.

“They still have not understood who the enemy is,” says Klassen.

“These parties may not be ready for change yet. The people, however, have been ready for change since 2008,” he says. “If change does not happen now, it will happen at the next general election in five years’ time.”