Relief, but uncertainty for Rohingya migrants stranded in Aceh 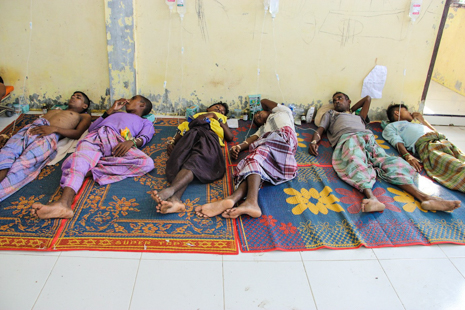 Recently arrived migrants rest at a shelter in North Aceh, Indonesia. Indonesian authorities said Friday at least 1,300 migrants from Myanmar and Bangladesh had arrived by boat (Photo by Ryan Dagur)

Muhammad Husein isn’t sure what his immediate future holds, but he’s sure it must be better than his last three weeks.

For almost 20 days before his boat washed up on shore here in North Aceh on Sunday, Husein was adrift at sea. The 29-year-old Rohingya Muslim from Myanmar’s Rakhine state said he was crammed in a boat along with more than 500 others, drifting into Thai waters only to be arrested, beaten, then eventually pushed away by the Thai military. By the time the boat found Indonesian waters, they had been out of food for several days and their boat’s engine had failed. Local fishermen found the boat and tugged it toward land.

Husein said he burst into tears when he realized he was safe.

“We saw people coming to us. They asked us, ‘Where are you from’? We said, ‘Burma. Burma. Muslims. Muslims’. Then they told us not to be afraid and said, ‘We are the same’,” he said. Burma is the former name of Myanmar, but is still widely used.

Husein spoke to ucanews.com this week at a complex in Kuala Cangkoi, a fishing village in North Aceh where authorities are temporarily housing hundreds of mostly Rohingya people who fled their homes in Western Myanmar. Husein said he was part of a group of more than 500 people — including Rohingya Muslims, but also people from Bangladesh — that had been together on a boat. Initially, they had been held at a small sports center with few toilets and poor ventilation. By Wednesday, they had been moved to a complex with three large buildings, a mosque and separate housing for women and children.

As of Friday, Indonesian authorities said there had been at least 1,300 Rohingya and Bangladeshi migrants rescued this week. That number may well rise in the coming days, with activists estimating that up to 8,000 migrants are currently at sea in Southeast Asia.

Rights groups say the Rohingya population has long faced persecution in Myanmar, where they are denied citizenship and bare the brunt of displacements amid interethnic violence. But the number of Rohingya who have fled the country has surged in recent years, with many paying human traffickers to take them by boats to neighboring countries.

Husein, for example, said he paid a human trafficker to take him to Malaysia before the boat’s engine failed. He declined, however, to say how much he paid.

Groups like Human Rights Watch have accused Thailand, Malaysia and Indonesia of playing “human ping pong” with the Rohingya, with the countries’ respective militaries often pushing boats back out to sea.

In that sense, Husein’s group was among the lucky ones. For now at least, they are receiving food, shelter and medical treatment, and local authorities say they can begin the often lengthy process of applying for official refugee status.

Weldi Junaidi of the Indonesian Doctors Association said that the migrants have suffered from dehydration, diarrhea and meningitis.

Amiruddin, who works with the local district’s social services department, said authorities were prepared to help, just as they had in 2012, when 140 Rohingya Muslims came ashore.

At the national level, Foreign Ministry spokesman Armanatha Nasir told media in Jakarta this week that the Indonesian government would not expel the migrants from the district. “Even though Indonesia isn’t a member of the [1951 Refugee Convention], Indonesia implements the principle of non-refoulement,” he said, according to jpnn.com, an online news site. “Therefore, what (the Indonesian government) does is to offer the shelter and also food.”

However, members of the Indonesian military have also told media they would turn away vessels — Husein’s boat was towed in by local fishermen. Recently arrived migrants rest at a shelter in North Aceh. Authorities said Friday at least 1,300 migrants from Myanmar and Bangladesh had arrived by boat (Photo by Ryan Dagur)

Solama Katoen, who was on the same boat as Husein, said she left Myanmar to save her only living child’s life.

Katoen had three children. But she said two of them, along with her husband, died last year as violence flared in her homeland.

"When I left my country, I knew that the situation would be difficult. But I thought that I should go immediately. If not, I would face conflict again and again,” she said. “I decided to leave my country so that I could save my child's life and also mine.”

Husein, too, is doubtful that life back home in Myanmar is viable. He planned to go to Malaysia to find work and eventually send for the rest of his family.

The last time he was in Malaysia was in 2012, when he had been a migrant worker. He returned to Myanmar that year because he heard there had been an outbreak of violence between Buddhist and Muslim communities. When he came home, he found that his parents’ house had been burned to the ground.

“There’s no more chance for Rohingya Muslims to live there,” Husein said. “Burmese say that we belong in Bangladesh instead of Burma. We could just go to Bangladesh, but people there don’t welcome us. Where should we go then?”

With additional reporting by AFP