St. Therese of the Child Jesus is an influential model for many Filipino Catholics The relics of St. Therese of the Child Jesus is welcomed with a shower of rose petals upon its arrival in Manila's San Fernando de Dilao parish church on Feb. 18. (Photo by Roy Lagarde)

Filipinos welcomed the arrival of the relics of St. Therese of the Child Jesus in Manila on Feb. 18 with a shower of white and red rose petals.

Parish priest Rolando dela Cruz said Catholics in his parish were honored to have been chosen as one of the places to receive the relics.

"This day is precious because God showed us His love," said the priest in his homily during the welcome Mass. "May your visit bring us real conversion, repentance, and new life," he added.

Born in France in 1873, St. Therese of the Child Jesus has been an influential model for many Filipino Catholics for her simplicity.

She became a nun in the cloistered Carmelite community of Lisieux, Normandy, in 1888. She died of tuberculosis at the age of 24.

St. Therese is well known throughout the world, with the Basilica of Lisieux being the second-largest place of pilgrimage in France after Lourdes.

Much of the information about St. Therese is from a collection of her autobiographical manuscripts called "The Story of a Soul."

The relics of St. Therese will be in the Philippines until May 31 for a tour of various dioceses. 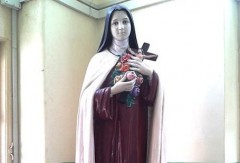 Don Bosco relic to get permanent home in Macau

The reliquary of St. Therese that travels around the world is originally called the "Centennial Reliquary" because it was made during the centenary of her death in 1997.

It is made from a scented hardwood from South America. The main relic case is solid silver dipped in gold.

The relics are the material remains of saints or holy persons after their death.