Regime change offers a glimmer of hope for landless smallholders

Myanmar farmers fight to get their land back 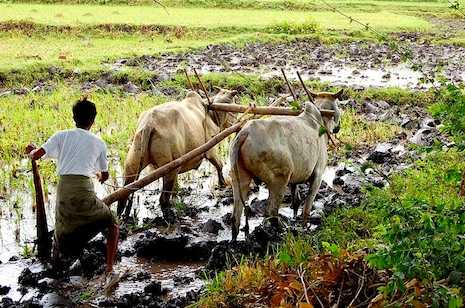 Myanmar farmers lost large amounts of land but now have a chance of getting some returned (file photo: Wikimedia Commons)

Hla Myo Naung, 67, gazes across a stretch of empty fields in the village of Thingankyon, outside Yangon. These were once paddy fields, which he and his fellow villagers were forced to give up in the days of military rule.

Now they are fighting to have them returned. But so far it has been an uphill battle.

Back in the 1990s, businesses with strong ties to the previous military regime commandeered hundreds of thousands of hectares of agricultural land in the name of industrial development.

“I was paid an equivalent of 100 US dollars in total for 20 acres [just over 8 hectares] of land by the army and their business cronies,” says Hla Myo Naung. “I have become landless since then and have survived on a small vegetable plantation. This is the time to fight to get our land back.”

The reforms that started in the country over a year ago have opened up the possibility that the land could be restored to the farmers. With that encouragement, they have taken advantage of newly passed labor union laws to form over 100 farmers’ associations.

They have followed this with a series of demonstrations and sit-ins, demanding the return of their land and better state subsidies for the farming sector. But they have little chance of retrieving or receiving compensation for the substantial amounts of land that have now been built on.

“Look at those villas over there,” says Hla Myo Naung, pointing out a smart new compound. “Those are army generals’ houses, built on our old paddy fields.”

However, their cause received a major boost this month, when the country’s reformist president Thein Sein promised an allocation of 100,000 Kyat (US$ 120) per acre of agricultural land to farmers. In addition, the army has now started a program of returning commandeered land which has not been used.

“The army has started compensating for the confiscated land or returning it to the farmers,” says Nay Myo Wai, a Yangon-based activist who works for farmers’ rights. “But we still have problems with some cronies who do not wish to do the same.”

One such ‘crony’ is Khin Shwe, one of the country’s most powerful businessmen and a member of parliament, who is implicated in a series of illegal land confiscations. He is currently suing Nay Myo Wai for defamation.

Nay Myo Wai, who is optimistic about his chances in the dispute, is supported by a group of farmers who have occupied a large tract which they say was illegally acquired by Khin Shwe.

In response, Khin Shwe said this week that he will use 2,000 of his own security guards to drive the farmers off the land.

So this particular battle looks set for collision and, with the recent influx of foreign investment, wrangles like this are likely to increase rather than decrease.

In the meantime, landless farmers like Hla Myo Naung continue to nurture a simple ambition.

“I miss my green paddy fields. If I get them back, I will be very happy,” he says.