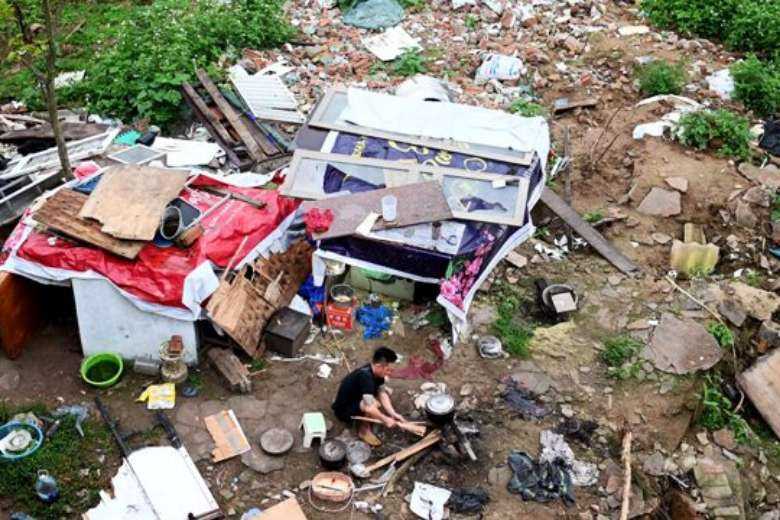 A man cooks food beside a shanty shelter in Hanoi, Vietnam, on March 16. The Covid-19 pandemic has impacted household incomes, health status and overall quality of life in the Southeast Asian country. (Photo: AFP)

Father Joseph Dinh Huu Thoai, a Redemptorist in Vietnam, has recently become the target of verbal attacks and threats after posting critical writings on Facebook.

His writings raised questions about the government’s handling of the coronavirus pandemic and the transparency of the National Covid-19 Vaccine Fund, established in May to purchase vaccines and finance the research to produce the vaccine in Vietnam.

The total donations received were equivalent to US$384 million. However, there was nationwide criticism of authorities after they called on government officers and employees to contribute a day's salary to the fund. More importantly, the public was also unhappy with “the government's silence on what was being done with the interest money in the bank.”

On Oct. 2, the television station of Quang Nam province aired a news story that accused Father Thoai of "smearing and distorting the party and the state's fight against Covid-19" and violating the cybersecurity law.

The priest denied having infringed the law because “it is reasonable and legitimate for any citizen to question the transparency of the vaccine fund.”

This is not the first time a member of the Redemptorist Province of Vietnam has been treated unfairly and blamed for being involved in political issues. Some years ago, even the provincial was prevented from leaving the country for leading his confreres in defending the poor against social injustices such as the illegal expropriation of land, mining projects and many other environmental issues.

Since June 2017, at least three Redemptorists have been barred from going abroad for siding with the poor.

For some people, the Church's teaching should be limited to spiritual life. They are uncomfortable with what they call "politicization of the faith." The separation of church and state is often misunderstood.

We should not confuse the legitimate constitutional separation of church and state with the separation of religion and politics. Nothing in the constitutions prohibits ordinary citizens and public officials from espousing viewpoints in the public square that are informed or motivated by religious convictions.

Thus, for the Redemptorists, opting for the poor and upholding social justice is in line with their spirituality and tradition.

In Vietnam, many people label Redemptorists as "anti-government" while in the northern Philippines they have been the target of “red-tagging” and identified as “communist supporters."

We need clarity. What does politics mean? Does it imply a negative meaning, as many people presume? Absolutely no!

To many people’s surprise, Pope Francis encourages Catholics to get involved in politics even if it may be "dirty, frustrating and fraught with failure.”

Christian faith is not a private matter that shapes how we relate to God but equally important is how we live our lives in public. Pope Francis affirms that social action and evangelization have an intrinsic relationship.

Religious belief is not limited to one's private life, but true faith and religious belief must make a credible communal witness both in one's personal and social life: "The Church cannot and must not remain on the sidelines in the fight for justice. All Christians, pastors included, are called to show concern for the building of a better world" (Evangelii Gaudium 183).

The impetus in our time for justice and peace certainly has its roots in the Second Vatican Council. In particular, the document Gaudium et Spes witnessed the emergence of social concern as a major focus of the Church.

The separation between the spiritual and the social needed to be discarded in favor of seeing humanity as one whole.

Faith in Jesus requires the Church's obligation to participate in shaping the moral character of society. This participation is a fundamental part of the mission entrusted to us by Jesus Christ.

Pope Benedict XVI affirmed that "social issues and the Gospel are inseparable." For that reason, the promotion of justice and peace cannot be an optional dimension to our mission or much less an ideological option (whether to the right or the left).

The consciousness of social commitment is something that we must incorporate into our actions because it is inherent to our mission.

The task of evangelization implies and demands the integral promotion of each human being. It is no longer possible to claim that religion should be restricted to the private sphere and that it exists only to prepare souls for heaven.

Thus, the follower of Christ cannot fail to hear the cry of his brother or sister in need.

For us as Redemptorists, it is clear that social ministry — justice, peace and integrity of creation — is rooted in the theology of the incarnation

Our founder St. Alphonsus clearly rejected the place of privilege he held in order to take his place among the poor. Alphonsus' preference is that of the Gospel, a Gospel of freedom, the Good News of tender love from a Jesus who "will not break a bruised reed or quench a smoldering wick until he brings justice to victory" (Matthew 12:20).

We reflect on St. Alphonsus' great love for the mystery of the incarnation, which did not remain simply a devotion disembodied from reality but took its best expression in the love and option Jesus made for the poor and abandoned.

For us as Redemptorists, it is clear that social ministry — justice, peace and integrity of creation — is rooted in the theology of the incarnation: God becoming man and sharing the pain of humanity. This is one of the many elements of our spirituality that binds us to the realities of the wounded world as it bound our founder.

As heirs of, and those who continue, the charismatic intuition and the theological and pastoral legacy of St. Alphonsus, we seek to remain faithful to our mission while adapting to the dramatic and changing realities surrounding us in constant docility to the Spirit of the Redeemer.

This attitude demands an attentive reading of the signs of the times, the Holy Scriptures, and our tradition to respond to the urgent challenges of today's world.

The social challenges, which are at the same time global challenges, demand a greater connection and solidarity among the Redemptorists of the different units. There is a great need to make more explicit the links of our mission with the values of social justice and to show the relevance of our charism in today's world.

From the beginning, our constitutions have stressed an option for the most abandoned. For Redemptorists, healing a wounded world means helping to build a more harmonious world, especially for the most vulnerable in our society.

This work is fully consistent with our constitutions, which state that our mission is characterized by service to people, especially "persons and groups who are poor and more neglected within the Church and society."

More recently, our general chapters have called for a renewal of our commitment to the poor; to evangelize the poor, as many of our confreres say, that the poor are our mission priority.

The most recent chapter has added that Redemptorists are called to "embrace the present with hope and go to the peripheries so that the freshness of the Reign may reach everyone, especially the most vulnerable and the abandoned.”

This is a phrase that has caused many difficulties. Even those who have no difficulty with the phrase itself find it hard to explain.

Social ministry can be considered a spiritual force that integrates all our working fronts such as mission, preaching, academics and sacramental ministry

When one lends his support to the poor, when he is in solidarity with them, when he accompanies them, he begins to hear the Good News in a new way, to be struck by its message as if for the first time all over again. He is in a real sense evangelized all over again.

Social ministry can be considered a spiritual force that integrates all our working fronts such as mission, preaching, academics and sacramental ministry. For this reason, it is essential to incorporate social engagement in all our apostolic actions.

Thus, we can affirm that social commitment is a dimension of our spirituality and our mission today and should be an effective expression of our charism in a wounded world.

In summary, the Redemptorists should be always at the forefront of serving the poor, marginalized and the exploited as part of their mission to proclaim the Good News of justice, peace and freedom for all.

Jesus says of his apostle: "Where I am, there also my servant will be" (Jn 12:29). That statement applies to St. Alphonsus: as Christ was in his mission to the poor, so was his disciple Alphonsus sent to the poor and sanctified in that sending.

For our Redemptorist work for evangelization to be effective, we must realize and take seriously the forces that are structuring our lives in all parts of our world.

According to the General Secretariat for Evangelization, the fact of globalization is a reality affecting lives everywhere. Our world is experiencing violence, acts of terrorism, anger and wars like never before. Modern technology and communication bring these realities into our homes. Fear is experienced throughout the world. The work of evangelization must take this modern reality very seriously.

Redemptorists should always bear in mind the care for social justice because it is not only our charism but the demand of evangelization which is rooted deeply in the Gospel and the teachings of the Church.