Ignoring threats and intimidation, Father Paulus Dwiyaminarta stands up for the marginalized 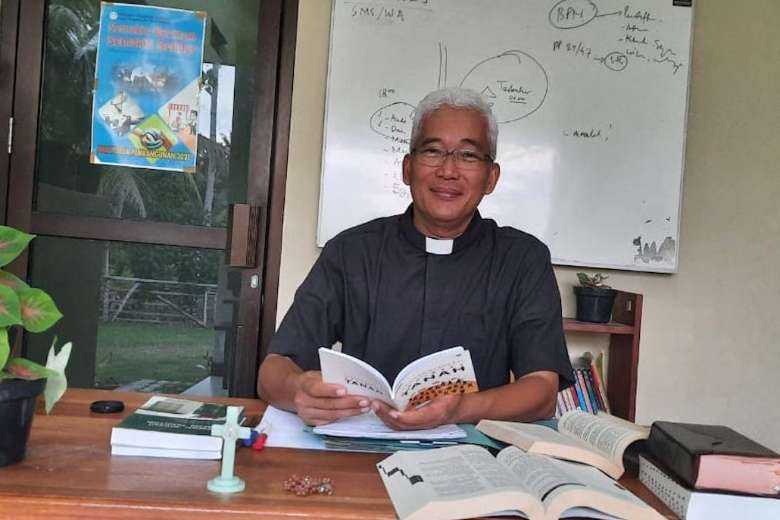 They have included criminal and civil cases dealing with environmental destruction, land conflicts, human trafficking, domestic violence and forced marriage, said the 52-year-old priest, who is based on Christian-majority Sumba island in East Nusa Tenggara province.

On average, he handles more than 100 cases per year and has a high success rate, he said, adding that his services are free and that he prioritizes people who have limited access to justice.

“The vast majority are poor and marginalized people,” he told UCA News.

In doing so he has had to face threats and intimidation from people, groups and organizations he has gone up against or those who support them. They have ranged from physical threats to smear campaigns on social media to discredit him.

Father Dwiyaminarta said it goes with the territory and encourages him to be braver in the struggle for “truth, humanity and justice."

He said he is answering a call to help the marginalized fight injustice and overcome any obstacles the legal system might throw at them.

“I serve in law because I realized it proclaims values in the Gospels which should be observed in everyday life,” said Father Dwiyaminarta, who joined the Redemptorists in 1988 and was ordained a priest in 1996.

The priest, who studied theology and philosophy at the Jesuit-run Sanata Dharma University in Yogyakarta, said he was inspired by his congregation’s founder, St. Alphonse Liguori, an 18th-century Italian bishop who dedicated his life proclaiming the Gospels to the marginalized and neglected.

“Many people face injustice or difficulty accessing justice, so becoming a lawyer seemed a natural path to take,” said Father Dwiyaminarta, who went on to study law at Atma Jaya Catholic University in Jakarta in 1999, graduating in 2001.

It’s something he had been interested in since his seminary days and something the Church should be actively involved in if it wants to promote Gospel values, he added.

He acknowledged few priests are involved in the law because most are content just to proclaim Gospel values rather than seeing them applied in everyday life.

“Where there is injustice, so the Church is called upon to involve itself and proclaim the Good News,” said the priest, who is director of the Sarnelli Institute, a church-run legal aid service in Sumba established in 2009.

The institute is named after Blessed Yanuarius Sarnelli (1702-42), an Italian lawyer and Redemptorist priest from Naples who stood up for the city’s poor and homeless.

It’s only right the Church should be involved in legal matters as injustice still occurs and provides the perfect stage to be a voice for the voiceless.

He pointed to forced marriage as one example. It is a problem that has almost become customary in East Nusa Tenggara province, so much so that it often goes unreported, he said.

The priest said his team has only handled four cases, of which just one, involving an 18-year-old girl, resulted in a conviction.

The girl managed to escape after being held for three days. The five men who kidnapped her were jailed for three years.

Asked what frustrates him most, he said: “We sometimes get what seem like unfair court decisions. I am concerned that there could be vested interests ensuring my clients don’t get justice, which should not be allowed to happen.”

He also said there are many cases when people just surrender to the decision of the court even though they aren’t guilty, either because of their ignorance of the law or they are let down by those who should be protecting them.

Better cooperation between all the elements involved could overcome such issues, he said, adding that it’s not just a question of giving the voiceless a voice, it’s also about making sure that voice is heard.