Reflections on Typhoon Haiyan survivors can help others respond to disasters 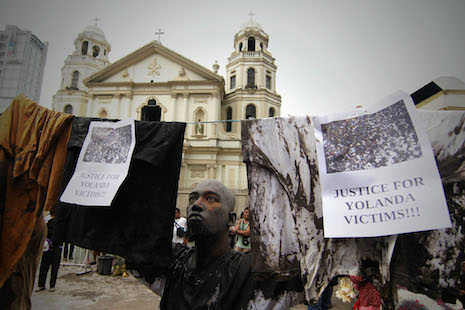 Families and friends of Typhoon Haiyan victims stage a performance in Manila in 2014 to dramatize their disappointment over the slow delivery of aid to disaster survivors. (Photo by Vincent Go)

A book of reflections and personal experiences of a Redemptorist brother who worked with survivors of Typhoon Haiyan has won two awards at this year's Manila International Book Fair.

"Desperately Seeking God's Saving Action: Yolanda Survivors' Hope Beyond Heartbreaking Lamentations" by Brother Karl Gaspar won the spirituality and ministry categories of the Cardinal Sin Catholic Book Awards, held over the weekend at the annual book fair. The typhoon was named Yolanda in the Philippines.

The awards that recognize authors and publishers whose work promotes "total human development, Gospel values, and Filipino culture" are named after the late Cardinal Jaime Sin of Manila.

"[Gaspar's book] offers a perspective on pastoral ministry and missiological activity which might help us to proclaim the Gospel anew today in many different circumstances and situations," said Father Michael Brehl, the Redemptorist superior general.

Brother Gaspar worked with typhoon survivors in Samar and Leyte provinces following Haiyan, which killed at least 7,500 people in 2013.

"The book is very useful in helping others to respond quickly, effectively, compassionately and prophetically to future disasters," Father Brehl told ucanews.com.

The head of the Congregation of the Most Holy Redeemer, popularly known as the Redemptorists, said Brother Gaspar's book is the story of a dynamic group of missionaries, priests, sisters, brothers, and lay people who responded to the needs of victims and survivors.

Maryknoll Sister Helen Graham said the book "allows us to listen to the voices of those who suffered through, and survived, the catastrophic typhoon."

"We listen to them as they struggle to find the language to name the disaster as they alternate between blaming God and clinging to God in faith and hope," said Sister Graham, a professor of Biblical Theology at the Loyola School of Theology in Manila.

"I am quite pleased with this recognition," Brother Gaspar told ucanews.com. He said the book is also a reminder to the Filipino people that the "government failed them when help was so desperately needed."

Brother Gaspar was also able to capture what he described as the "politics of aid" that only worsened the trauma and the difficult process of recovery for the survivors. He criticized the lack of transparency in the delivery of relief services by international aid agencies and the Philippine government.

In his book, he describes how disaster survivors carried "the cross as they struggle to rebuild their lives." He also described the struggle as "people's Calvary."

Brother Gaspar recalled his encounter with a couple, Arnold and Anita Librea, who lost two children to the rampaging floodwaters. The remains of the children were buried in a mass grave outside the San Joaquin Parish church in Palo town.

The book also highlights the people's desire to recover from the tragedy.

The Redemptorist brother underscored the people's kindness and generosity, a sense of self-sacrifice and compassion and how they valued their "gift with a second life."

"Through their trauma and their attempts at healing themselves, they have also gained insights into what their mission in life is," said Brother Gaspar.

The Cardinal Sin Catholic Book Awards is organized by the Asian Catholic Communicators Incorporated in collaboration with the Catholic Mass Media Awards. Every year, the awards acknowledge publications that foster Christian formation and values.