Carmelites in central Vietnam celebrated three nuns taking their first vows and installed a new retreat house for visitors. The ceremonies on June 24 were part of the year-long jubilee to mark the 25th anniversary of their return to their old monastery in the former Vietnamese capital of Hue.

Early in 1975, Carmelites moved to Saigon (now Ho Chi Minh City) to escape the hard times the Vietnam War brought before its end on April 30. Their monastery was taken over by the army and was not returned until 1996.

Since it was founded in 1909 with five Carmelites from Hanoi, the monastery has attracted many indigenous members. The order established five more monasteries in the country and several abroad.

An outstanding member was Sister Marie Agnes Nguyen Thi Ngoc, who was known for suffering the excruciating experience of converting to Catholicism and putting strong faith in monastic life.

Born to a Confucian family in 1902 in Hue, she was named Chon Nhu Ngo. Her father was Nguyen Van Mai, a high-ranking mandarin, and her mother Phan Thi was his second wife.

She attended a French school until 1916 and worked as a teacher at a girls’ school in Khanh Hoa province, where her brother Joseph Mary Nguyen Van Thich taught at a boys’ school.

Her parents knew of her plan to convert to Catholicism like her brother, so they tried their hardest to prevent her conversion

She moved to work in Ha Tinh province after Thich, who was baptized in 1911, left home and entered a seminary in Hue in 1917. He was ordained a priest in 1926.

Bishop Eugene Marie Joseph Allys of Hue, a member of the Paris Foreign Missions Society (MEP) who led Hue from 1908-30 and established the local Carmelite monastery, wrote: “Her parents knew of her plan to convert to Catholicism like her brother, so they tried their hardest to prevent her conversion. They confiscated all religious materials she received from him and sheltered her from his influence by isolating her at a remote place during her summer holidays.

"Her father feared that she would secretly receive baptism like her brother if she returned to Ha Tinh, so he asked her to move to teach at a school in Hue. His action unintentionally created an opportunity for her to live at a place where she could embrace Catholicism as she had dreamed.

“It was hard to imagine how her father was angry and her mother was broken-hearted when they knew that their daughter escaped from her place. They and their people immediately looked round for her in the city and especially around local convents and monasteries. Finally, they were given her letter saying that she was in the Carmelite monastery and would not leave there until she became a Catholic. 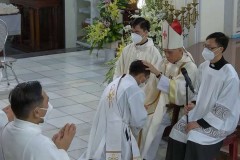 "Her mother came to meet her at the monastery and Ngoc told her that she was determined to follow the religion and to be a nun. Her mother became distraught, let out a piercing scream and threatened her, but she did not change her mind. The mother gripped her hair and tried to drag her out of the monastery’s living room, but Ngoc opposed her by lying on the ground and consequently her angry mother’s efforts were in vain.

"On the following day, she and her seven other children returned to the monastery. Ngoc was not only shaken by her siblings’ cries but knew how to console and offer them sound words of advice. As a result, two of her siblings were inspired by her advice and asked to convert to Catholicism. Their mother was completely at a loss and looked for their father’s power to control Ngoc’s inexplicable fearlessness.

“Only a few days later, before his daughter, the father was thoroughly wretched and furious out of religious malice, and ordered her to follow him to home immediately. Without fear and anxiety, Ngoc told him what she had told her mother: she was ready to suffer torture but not give up her sheer determination. Her father furiously grasped her hair and tried to pull her out, but he failed as she lay on the ground. He had no choice but to leave for home, threatening to return to the monastery, but he never did.”

Two weeks later, Ngoc was baptized with her Christian name Marie Agnes and joined the Carmelite monastery. She took her vows in 1921 in a ceremony attended by her family including her father and other officials. Due to her health problems, Sister Ngoc changed to the Daughters of Mary of Immaculate Conception in 1926 and died in 1941.

Her father also converted to Catholicism before his death in 1945. Inspired by her vocation, her niece became a nun and her nephew was ordained a priest.